Aston Martin, the luxury British carmaker imperilled by a near 75% slump in its share price since returning to the stock exchange as Aston Martin Lagonda in late 2018, had some good news and some bad news over the weekend. A seemingly positive development is news that Chinese electrical vehicle battery CATL has held talks with Aston Martin over potentially stepping in with a multi-million refinancing arrangement.

On the flipside, news also broke yesterday that Simon Sproule, the company’s head of marketing and public relations, had left to become chief communications officer at Fiat Chrysler. No replacement has yet been installed. And, based on a lack of information coming out of Aston Martin, even lined up.

Last week saw Aston Martin’s share price suffer a further drop of over 20% between Monday and Thursday after it shocked the City with its latest profit warning. It accompanied that with an update that informed investors talks were ongoing “with potential strategic investors which may or may not involve an equity investment”. 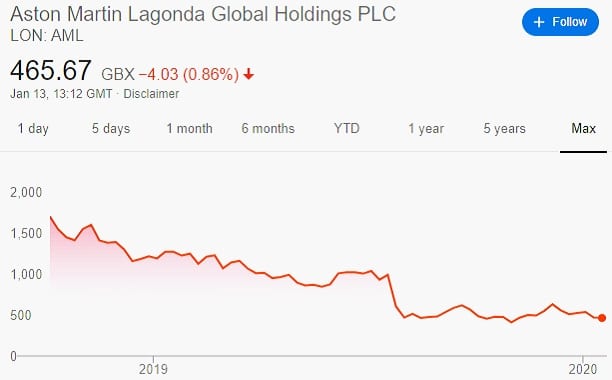 Sky News reported that China’s CATL is now the most likely source of the cash injection or re-financing that Aston Martin so badly needs. The Financial Times also reported that privately held Chinese automotive group Geely, which also owns Lotus and a stake in Daimler, is considering offering Aston Martin a cash injection. The finance newspaper also said F1 billionaire Lawrence Stroll is considering taking a 20% stake in maker of James Bond’s favourite cars for around £200 million.

Aston Martin needs cash to fund a ramping up of production of its first 4×4 model, the DBX, which is scheduled for launch in May of this year. It also needs to fund a major marketing push, designed to ensure sales of the DBX get off to a strong start. Much of Aston Martin’s hopes are pinned on the success of the launch.

Who will lead that marketing campaign is less clear following the news that Mr Sproule is no longer with Aston Martin. The marketing executing held a senior role at Ford, when Aston Martin was under the American carmaker’s ownership, before move onto Nissan. It was there he met Andy Palmer, who is currently Aston Martin’s CEO and headhunted Mr Sproule to head up the company’s marketing and PR.

He is quoted as saying in Aston Martin’s own magazine that while “Aston Martin is a global brand, there are places in the world where people don’t understand the company as well as we would like.”

He also said in the same interview that the acid test of his time at the company would be if the brand was in better shape and “more loved and successful”.

It’s hard to argue that Aston Martin has become a more successful brand under Mr Sproule’s watch. Hopefully his successor will manage to achieve that metric of success through a successful launch of the DBX. If sales of the 4×4 underperform, it becomes difficult to see where Aston Martin goes from there.