The Aston Martin Laguna share price has had a rough time of it since the iconic British sports carmaker that has failed and been resuscitated seven times already became a public company through its October 2018 IPO. The company’s share price fell over 50% from its 1700 GBX starting level in October to its late-May low of 843.7 GBX before a recent recovery back above the 1000 GBX level. The loss has been even heavier for IPO investors who paid 1900 GBX, or £19, a share. 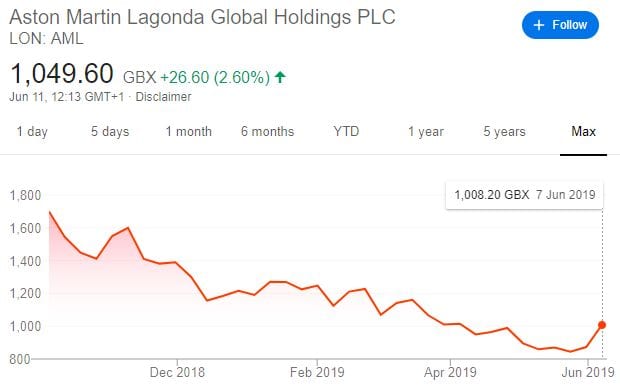 Aston Martin is now looking to convince the City that the impending debut of its new DBX model will turn the company’s fortunes around long term. Or at least, it will prove to be a successful first step in its IPO promise to release 7 new models in 7 years and be selling 14,000 vehicles a year by the beginning of the coming decade.

Key to Aston Martin achieving those figures is a move into a new ‘luxury’ rather than ‘high end’ market it so far has no experience of. For a hundred years Aston Martin has exclusively built high performance sports cars. The DBX, a 4×4 that will sell for £150,000 represents the company’s first ever ‘family car’. Albeit, it is fair to say the price point is still not one that would fit the average family budget.

Realising Aston Martin Lagonda’s target of shifting down a price level to increase sales numbers also involves building a new manufacturing plant. Work is now well-advanced on a new manufacturing plant at St Athan in Wales, which chief executive Andy Palmer says should be churning out 5000 DBX models a year from 2021 when the plant reaches full production.

Yesterday the company invited around 20 analysts from City investment houses and stockbrokers to St Athan to see the new model in action for themselves as well as cast their eyes over progress at the new plant that will produce it. The aim of the trip was to convince doubters that Mr Palmer’s commitment to delivering 7 new models including all-electric luxury vehicles is achievable. Much of the negativity pushing down the company’s share price has centred around scepticism that Aston Martin and Mr Palmer will achieve these lofty ambitions.

Central to the strategy’s success has been ‘de-risking’ production by using components an engine and electronics from Mercedes-Benz models. Mercedes-owner Daimler also holds a 5% stake in Aston Martin.

The big risk now facing Aston Martin’s attempts at a turnaround is the level of competition in the market it is targeting. Other high end brands have already released 4x4s in the same approximate price range. These include the Bentley Bentayga at £140,000, Lamborghini’s £165,000 Urus and the £250,000 Rolls-Royce Cullinan. One level down and the competition includes top end Range Rovers and Porsche Cayennes. Luxury family cars have suddenly become a crowded market.

Aston Martin’s recent 25% share price recovery will come under pressure if the company does not reveal details of its order book for the DBX before its pre-Christmas launch. If the company holds off until next year to report sales figures it can be expected that it will take more than a high-octane jolly to South Wales to keep the City’s analysts well-disposed to the Aston Martin stock.

While most still caveat the argument with the get-out clause it is far from... END_OF_DOCUMENT_TOKEN_TO_BE_REPLACED

Natural gas prices have rocketed with Russia accused of managing supply to drive up... END_OF_DOCUMENT_TOKEN_TO_BE_REPLACED

After their valuations boomed in 2020, the UK’s online fast-fashion giants of Asos and... END_OF_DOCUMENT_TOKEN_TO_BE_REPLACED

The dust has almost settled on the months-long takeover battle between U.S.-based private equity... END_OF_DOCUMENT_TOKEN_TO_BE_REPLACED