The Aston Martin Lagonda share price rose by 4.5% after Daimler, the German automaker giant that owns Mercedes-Benz, was announced as taking up a 20% ownership stake in the company. The investment will form part of a refinancing deal that will keep the imperilled British luxury carmaker afloat. 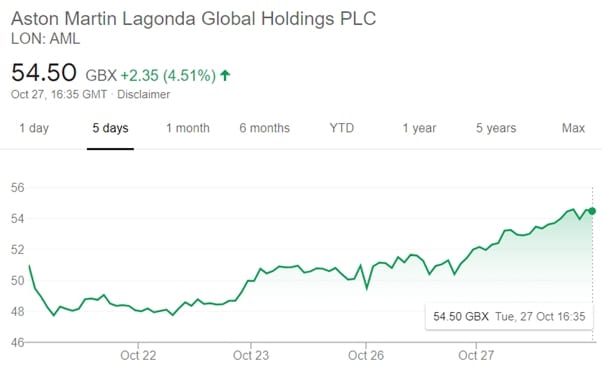 The agreement will also see Daimler share engine, hybrid and electric technology with Aston Martin, in a £286 million tie-up.

The partnership between two emblematic car brands is the latest step in the turnaround for Aston Martin being engineered by the Canadian businessman Lawrence Stroll. Mr Stroll took over as executive chairman of the British brand earlier this year after leading a consortium of investors who saved Aston Martin from the brink of collapse.

With an impressive track record in building and turning around luxury goods brands, as well as involvement in F1, Mr Stroll, at least on paper, could be the company’s knight in shining armour.

It’s only two years ago that Aston Martin listed on the London Stock Exchange as a public company, having sold stock through the IPO at £19 a share. Despite yesterday’s 4.5% rise, the Aston Martin share price is currently 54p, making it one of the least successful listings in recent history. The luxury carmaker is currently worth just £995 million.

But it has survived a close shave with another failure to add to the seven times the company has already gone bankrupt over its 107-year history. The luxury sportscar market is not an easy one for small independent carmakers. Even if James Bond is a fan.

Mr Stroll’s Racing Point F1 team will next year be rebranded Aston Martin and the ambition is to become a contender. Four-time world champion Sebastian Vettel will drive for the team. The hope will be that the F1 platform will help raise the Aston Martin profile again, translating into more sales.

Daimler’s 20% ownership stake in Aston Martin Laguna will be built up from its current level of 2.6% over the next three years. The German company will be the second largest shareholder, behind Mr Stroll, and will have the right to appoint a representative to the board.

“We have a new business plan with Daimler. We have got to where we are after six months of monumental effort.”

The ownership consortium led by Mr Stroll includes the JCB construction vehicles magnet Lord Bamford and has secured two other new investors alongside the Daimler deal. The U.S. investment group Permian and Zelon, a European family investment office, have subscribed to £125 million in new shares in the company being placed at 50p.

More working capital will also be raised through a £259 million bonds issue, with another £840 million of bonds being issued to fund the paying down of existing borrowing that is commanding significant interest.

The relationship between Aston Martin and Mercedes-Benz is not a new one and Daimler Group veteran executive Tobias Moers took over as the former’s chief executive last summer. That relationship is believed to have helped pave the way for Daimler’s greater involvement.

In terms of its forward-looking strategy, Aston Martin is now targeting ramping up annual production to 10,000 vehicles by 2024. It believes that will bring in £2 billion in revenue, translating into an operating profit of around £500 million.

Around half of the total number of vehicles sold a year are expected to be accounted for by new Aston Martin DBX sport utility model – the company’s first SUV. It is being assembled at a new facility build in south Wales. Sales numbers have some way to go though, with around 350 DBX cars sold over the past 3 months.

An Aston Martin DBX SUV starts at £158,000 for the basic model. Not cheap, but definitely a car to turn heads on the school run!

With bond yields at historical lows, they are not a particularly attractive investment for... END_OF_DOCUMENT_TOKEN_TO_BE_REPLACED

Most of the world’s investment capital is held in the stock of companies known... END_OF_DOCUMENT_TOKEN_TO_BE_REPLACED

It’s not so long ago millennials and Gen Z were being criticised for spending... END_OF_DOCUMENT_TOKEN_TO_BE_REPLACED