Aston Martin Share Price Crashes By Over 25% In One Day

Luxury British sports car maker Aston Martin suffered a devastating Wednesday on the London Stock Exchange as the company lost over a quarter of its vale. The Aston Martin stock tanked by 25.91% following an announcement by the iconic British luxury automobiles that it was cutting its sales guidance figures. The update, which was unscheduled, informed investors that the number of vehicles it now expected to deliver this year is between 6300 and 6500. City analysts had been expecting a number between 7100 and 7300.

Blame for the downwards revision was placed on ‘external challenges’ and ‘macroeconomic uncertainties’, which presumably translates as ‘Brexit’. For existing investors, the bad news is that Aston Martin doesn’t appear to expect the gloom to lift anytime soon, adding to the note:

“We anticipate that this softness will continue for the remainder of the year and are planning prudently for 2020.”

The worst of the losses were sustained immediately after the London market opened with a sharp 22% nosedive to 810p. However, there was no rebound to suggest markets suspected an overreaction and the day’s trading finished with the share price down 25.91% to 766.80p. 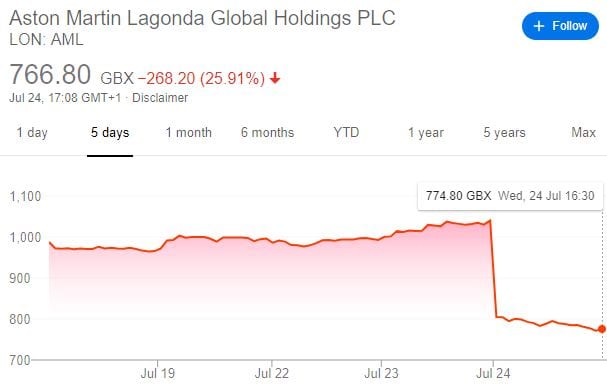 The Aston Marin brand is synonymous with the James Bond movies and the strength of its brand has ensured investors have been willing to step in and revive it despite the company going bankrupt a total of seven times over the course of the 20th century. The company’s most recent saviours, Kuwaiti funds Adeem Investment and Primewagon, along with Investindustrial, sought a return on their investment through an IPO last October. However, the company has struggled to live up to its early valuation since and the share price has been on an almost unbroken downward trend. Before today’s shock announcement, its share price had actually had one of its better weeks last week, gaining over 6%. 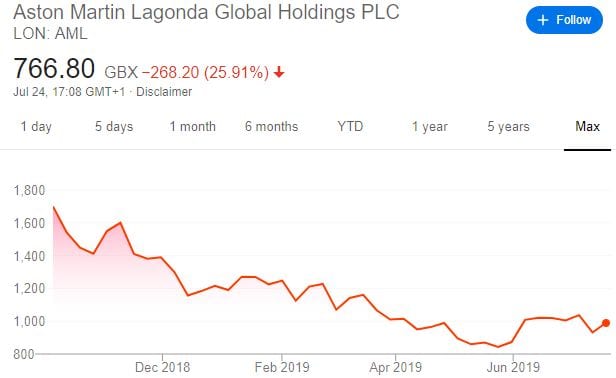 In the run up to Aston Martin’s IPO last year, the company was presented as a British equivalent to Ferrari. The latter has enjoyed a steadily improving share price since its own listing on the NYSE in 2015. But Aston Martin manufactures significantly fewer cars each year than Ferrari does. The company’s current share price is now well less than half its starting point last October.

Chief Executive Andy Palmer told investors that capital expenditure plans would be reduced to around £300 million from £320-£340 million to compensate for the shortfall in shipped cars and that “decisive action” was being taken to manage the company’s inventories and the long term future of the brand. He concluded:

“We are disappointed that short-term wholesales have fallen short of our original expectations, but we are committed to maintaining quality of sales and protecting our brand position first and foremost.”