UK aerospace and defence giant BAE Systems has seen its share price gain a respectable 2% today on the news it is to announce €1 billion in revenue from a deal recently struck with Germany’s Laftwaffe for 38 Eurofighter Typhoon jets. The order from the German government on behalf of its airforce was sealed last week and will be worth a total of €5.4 billion. 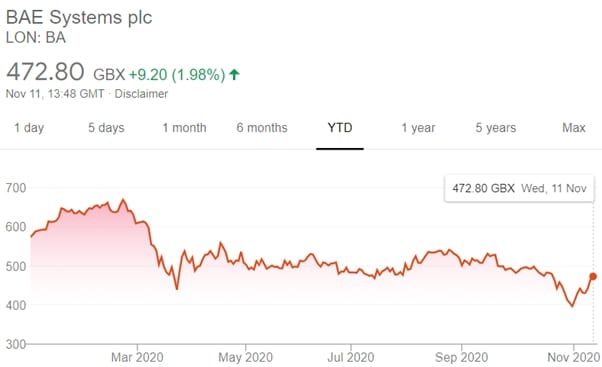 Details of the workshare agreement, the fighter jets are developed in partnership with Airbus, will be revealed in coming days. But the aircraft will be assembled and have their systems integrated at Airbus’s base in Manching, in the Munich region, while many of the parts will be manufactured by BAE at its Lancashire plant. The plant in Warton, near Preston, will most likely build the front fuselage and tail sections of the planes ordered by Germany.

BAE is the UK’s largest defence group and part of the Eurofighter consortium, alongside continental partners Airbus, the Franco-German joint venture, and Leonardo, the Italian defence and aerospace company.

The Luftwaffe order is a major boost for the Warton plant as orders for the Eurofighter have slowed in recent times, despite a total of 600 being sold over the past 20 years. That’s seen a drop in work for Warton, whose main contracts are with Eurofighter buyers, the Royal Air Force and Saudi Arabia, for whom it provides final assembly and systems integration. Last year it did the lion’s share of the work on 24 Typhoons ordered by Qatar but until the recent German order, the pipeline of new work had been looking concerning.

While Germany has so far committed to ordering 38 Typhoons, the total purchase plan is expected to reach 93 new fighter jets. BAE will also hope to benefit from future tranches of orders.

BAE Systems this week also issued a trading update that informed investors full-year revenues look likely to come in at around £20 billion, leading to a pre-tax profit of £1.8 billion. There has, investors were informed, been an improvement in operating performance, and so revenue forecast, since the summer.

BAE is the evolution of the once several companies in the UK arms industry agglomerating over the years, and finally merging as a single company when British Aerospace merged with the defence electronics and shipbuilding business or Marconi around 20 years ago. As well as being part of the Typhoon conglomeration, it is also a member of the U.S.’s American F-35 programme, and produces the fighters for the UK’s aircraft carriers. Which it partly built.

Its naval projects include building the Astute and Dreadnought nuclear submarines, which are manufactured in Borrow, and Type 26 frigates for the Royal Navy, which it builds at its shipyard on the river Clyde in Glasgow.

The Pentagon, not the UK’s Ministry of Defence, is by some distance BAE’s largest customer, accounting for more than 40% of the company’s sales. It buys tanks and amphibious combat vehicles from BAE, as well as using it for warship repairs.

While the Covid-19 pandemic doesn’t have a direct impact on defence spending, the BAE share price has suffered with the broader markets this year. Investors are worried to cost of servicing the debts that the pandemic has resulted in will see governments on both sides of the Atlantic reduce defence spending over coming years.

Sansy Morris, an analyst at stock broker Jefferies, is quoted in The Times as commenting:

“A Covid vaccine is potentially positive for BAE. It limits the economic damage and the chance of future cuts in defence spending running as deep or for as long reduce, even though we still see cuts as inevitable.”