The cost of a barrel of Brent crude oil has returned to the highs of around $124 a barrel seen in early March shortly after Russia’s invasion of Ukraine. The most recent leap in the oil price, which earlier this month had dropped back to around $103-a-barrel, comes after the EU reached an agreement that will see it stop all Russian oil ports made by sea.

Brent crude was up 1.9% this morning to $124.07 at one point, though that’s since eased to a little over $123 a barrel. Two thirds of the EU’s Russian oil imports come into the economic block via tankers. Those deliveries will now be stopped with only pipeline imports, accounting for the remaining third, exempt from the embargo. 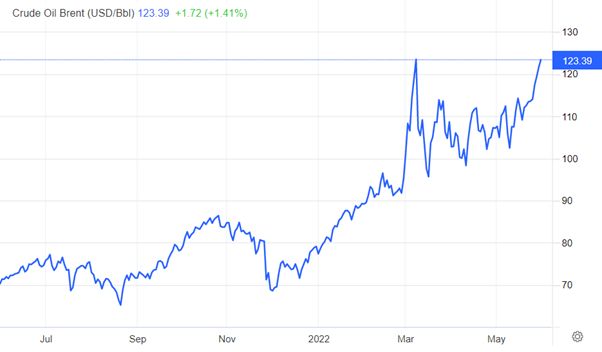 The decision means oil supply chains are now expected to suffer from new disruption as the EU seeks to replace Russian oil and Russia looks for new buyers. That is anticipated to see freight costs increase as oil comes into the EU from further afield. The move will also heighten supply security concerns.

“With our $120 per barrel Brent target now in sight, we believe that a sharp contraction in Russian oil exports could trigger a full-blown 1980s style oil crisis and push Brent well past $150 per barrel.”

The past three years have been a hugely volatile period for oil prices with first the Covid-19 pandemic depressing demand and disrupting supply lines which then struggled to cope with the surge in demand when lockdown periods started to end last year. Russia’s invasion of Ukraine, the former is the world’s third largest oil producer and responsible for 20% of global exports, then saw oil prices briefly hit $139 in March.

Demand was again muted over recent months as China has grappled with a new wave of Covid cases, imposing strict lockdowns in some regions and cities. However, with authorities in Shanghai lifting restrictions on businesses from tomorrow, Chinese demand is expected to jump again.

That shift, coupled with the EU’s announcement today, has driven the oil price up again as the peak summer season approaches. Demand tends to rise over the summer months when people drive more and fly abroad for summer holidays.

The Opec+ alliance of big oil producing nations, which includes Opec and a handful of other producers led by Russia, is still holding back millions of barrels a day in production that many analysts are convinced could be fairly easily ramped up.

The current deal on volumes was agreed on during the pandemic when lockdown restrictions across the world led to a supply glut. While Saudi Arabia recently claimed they cannot physically increase supplies at short notice, there are strong suspicions major oil producing nations are happy to maximise the huge profits currently being generated at high prices.

Some additional capacity is being added to supplies each month but calls to open the taps wider, more quickly, have so far been staunchly resisted.