The MPC has controlled the UK’s monetary policy since being handed control by the government in 1997 and consists of the Governor, the Deputy Governors for Monetary Policy and Financial Stability, and Markets & Banking, a member appointed by the Governor (the Bank’s Chief Economist) and four external members appointed by the Chancellor. In November the MCP was accused of misleading markets after participants believed it had been indicated rates would rise to 0.5% then but were held.

With inflation continuing to rise ahead of forecasts since, it was almost certain yesterday’s MPC meeting would culminate in a hike, which it did. However, the increase was very nearly a whole 0.5%, taking the base rate to 0.75%. Four members of the committee voted for the larger rise to five for the eventual 0.25%.

The closeness of the call means the City is now betting on a second consecutive rise when the committee next meets on March 17. Followed by a third, taking the base rate to 1% in May. The extent of the support for a more aggressive hike yesterday has even seen a significant number of investors and analysts predict the base rate will reach 1.5% by the end of the year. 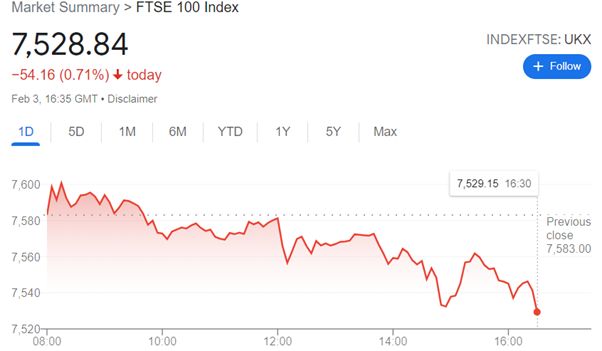 The FTSE 100 dipped 0.7% on the news, though losses were cushioned by the boost to banking and finance stocks, which will benefit from higher interest rates and have a heavy weighting in the index. Gains were controlled by the fact yesterday’s 0.25% rise had been priced in but it wouldn’t be a surprise if speculation on the probable extent of additional rises as the year progresses sees further upwards momentum today for the finance sector.

The Lloyds share price gained 0.85% yesterday, HSBC by 0.5% and Legal & General 0.5%. The reasoning of the 5 members who voted to raise the base rate by just 0.25%, outlined the meeting’s minutes, was a belief short term wage and price pressures need to be balanced against the possibility inflation could still

“fall more quickly and to a greater extent than expected if energy and other tradable goods prices followed a lower path than in the MPC’s central projection”.

The four members who were in favour of a larger 0.5% increase reasoned more aggressive tightening of monetary policy would

“reduce the risk that recent trends in pay growth and inflation expectations became more firmly embedded and thereby help to bring inflation back to the target sustainably in the medium term”.