The Barclays share price fell by 4.4% yesterday, with the losses extended by just short of another 1% in early trading this morning. The drop came after the bank’s reinstated dividend falling some way short of expectations and a cautious 2021 outlook. Barclays also warned investors its key capital ratio and UK interest-rate margin would worsen this year, as would its interest- rate margin in the UK. 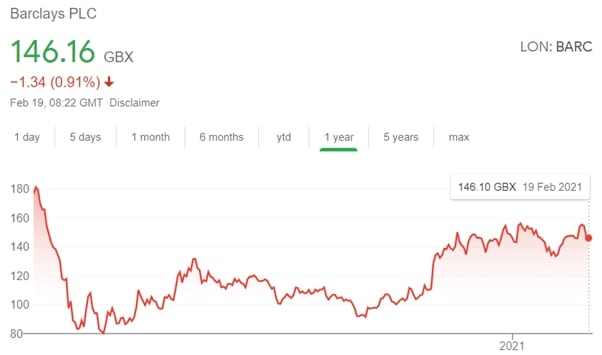 One silver lining for Barclays investors was the announcement by the bank, one of the UK’s biggest with 24 million customers, 859 branches, 83,000 employees and a market capitalisation of £26 billion, of a new share buyback scheme starting this quarter. However, some analysts suggested Barclays’ board has opted for a smaller dividend, propped up by a buyback, because the latter could be more easily reversed if the bank needs to unexpectedly bolster its balance sheet in the months ahead.

Share buybacks involve companies using spare cash to buy their own shares, which are then cancelled, reducing the overall amount of equity issued, increasing the relative value, or earnings per share, of remaining units of equity. Some investors, especially those with a longer-term outlook, favour share buybacks ahead of higher dividends. They are also more tax efficient for investors than dividends.

However, they can go wrong for companies as Barclays itself has experienced. In 2007 and 2008, Barclays conducted extensive buyback programmes. It purchased its own share at close to the peak of the market, draining cash reserves. When the financial crisis hit it was then forced to issue new shares more cheaply.

Barclays hasn’t paid a dividend since October 2019 after a planned 6p-a-share payment due in early 2020 was cancelled. That decision was forced by the Prudential Regulatory Authority, the banking sector’s regulator, insisting large banks conserve their capital as an additional buffer during the Covid-19 pandemic. The regulator lifted that veto in December.

Analysts were expecting the dividend to be reinstated at around the 3.5p-a-share level. The actual sum announced was a much lower 1p-a-share, plus the share buyback. The buyback will be worth up to £700 million.

The bank’s full year profits in 2020 dropped by 30% to £3.07 billion as a result of the setting aside of a £4.8 billion provision against an increase in defaults on business and retail lending as a result of the economic fallout of the pandemic. Setting aside that money now does though mean Barclays expects 2021 to see “a meaningful improvement in returns”.

One major criticism of the bank has been the rise in the number of bankers among its ranks paid more than £1 million last year. The number rose to 448 employees in 2020, up from 399 in 2019. Barclays’ argued the bonuses were justified and were mainly rewarded for the strong performance of the group’s investment bank.

The rebukes at the increase in employees earning 7 and 6-figure sums when another 27,000 employees earn less than £25,000 were led by Luke Hildyard, chief executive of the think tank High Pay Centre. He stated:

“If a similar sum were reallocated to shareholders, or shared among the 27,000 Barclays employees earning less than £25,000, it would probably represent a much more sensible, productive and proportionate use of the money.”

With bond yields at historical lows, they are not a particularly attractive investment for... END_OF_DOCUMENT_TOKEN_TO_BE_REPLACED

Most of the world’s investment capital is held in the stock of companies known... END_OF_DOCUMENT_TOKEN_TO_BE_REPLACED

It’s not so long ago millennials and Gen Z were being criticised for spending... END_OF_DOCUMENT_TOKEN_TO_BE_REPLACED