After a loss of over 6% yesterday, Tesla’s share price has now lost more than 40% of its total value this year and a growing number of analysts are coming out with downgraded stock price targets. With bears and shorters again stalking the electric car manufacturer, there are now significant doubts over whether Tesla will be able to turn things around.

Many are predicting further heavy losses for the Tesla share price as Wall Street appears to fall out of love with Elon Musk’s bold gambit to lead the new all-electric automobile industry. There has even been speculation around possible acquisition moves should Tesla’s share price drop below the $100 level. 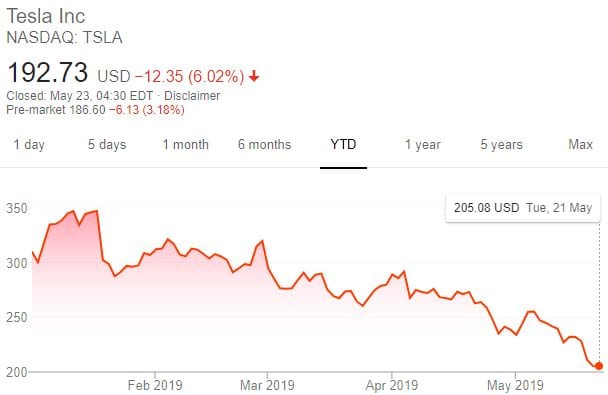 Combined deliveries of Tesla’s Model S and Model X were reported as having falling year on year and sequentially and Model 3 deliveries were also down on the previous quarter. However, despite the disappointing results over the first quarter of 2019, Tesla struck an optimistic tone and stated that it expected to finish the current quarter in a position of positive cash flow. The company also offered forward guidance that the second half of the year should maintain that cash flow-positive status as well as resulting in full-year deliveries that improve on those of 2018 by 45% to 65%.

However, there is significant scepticism on the part of a large group of analysts as to whether that forward guidance is realistic. Citigroup analyst Itay Michaeli lowered his ‘base-case’ price target to $191 from $238 and warned there was also a chance of a ‘full bear’ scenario that could see the Tesla share price fall as low as $36. He gave the chances of such a full bear scenario developing a surprisingly high 40% and explained to the investment bank’s clients:

“The recent capital raise was a positive step but won’t necessarily get the balance sheet out of the woods if Tesla cannot achieve FCF targets. So the recent reported internal memo [on cost cutting], which seemingly called into question prior guidance, didn’t help the risk/reward calculus.”

Morgan Stanley analyst Adam Jonas also warned of a bear scenario. As an established Tesla fan, Mr Jonas’s caution may have a particularly negative impact on market sentiment. He put his worst case scenario for the Tesla share price at a mere $10 and said that could potentially unfold if China sales came in at half or below his forecast for the region.

A year ago, the average analyst price target for Tesla was $320. That has now dropped to $282.56 and 42% of the analysts Bloomberg tracks have a sell recommendation on the stock.