Guild, the Esports group David Beckham is believed to be the second largest shareholder in, is reportedly planning a London IPO within a matter of weeks. If the float goes ahead as planned in October it would be the first Esports company to go public in the UK. Reports this morning suggest the plan is for Guild to list on the main London Stock Exchange market and not the alternative AIM.

For the main market, Guild will count as a relatively small company. Reports put the target valuation being sought through the IPO at £50 million, raising around £20 million. Earlier in the summer it is believed the company’s board were looking at a £100 million valuation. But it appears that has been significantly adjusted down, perhaps as a result of feedback from potential investors sounded out over their interest.

Guild currently has a stable of four Esports players on its books with much of the cash that it is hoped an IPO will raise funnelled towards the recruitment of up to another twenty professional gamers over the next 18 months. The team of pro gamers will compete across 4 popular video games – Fifa, Counter-Strike: Global Offensive, Fortnite and Rocket League.

The company’s business model is to earn prize money from the tournaments its players compete it, with merchandise a secondary in revenue stream. Guild has hired artist and fashion designer Fergus Purcell to design a range of branded t-shirts, hoodies and other items to sell to fans.

It is also hoped that the Beckham brand will help attract additional sponsorship and endorsement deals. Existing shareholders like Beckham are expected to retain their stakes during the listing.

“Guild will be the first esports franchise to join the London stock market, which will provide us with the caché, credibility and capital to fulfil our ambition to become one of the world’s top ten esports franchises within three years.”

Esports is one of the fastest growing entertainment markets in the world, with the broader video gaming market itself enjoying a period of sustained growth. Between 2012 and last year, the number of fans watching gamers competing against each other online grew from 134 million to 443 million. The statistics are based on research by Esports market data company Newzoo, which has forecast the Esports sector generating revenue of $1.1 billion this year.

It will be interesting to see how ready City investors are for a public Esports company. While no company whose business model is competing in Esports tournaments has so far gone public in the UK, Gfinity, a company that hosts tournaments did list in 2014. Ex-Manchester City chief executive Garry Cook was Gfinity’s boss until March of this year. But the company has struggled to gain traction and its share price is now under 4p, having floated at 17p. 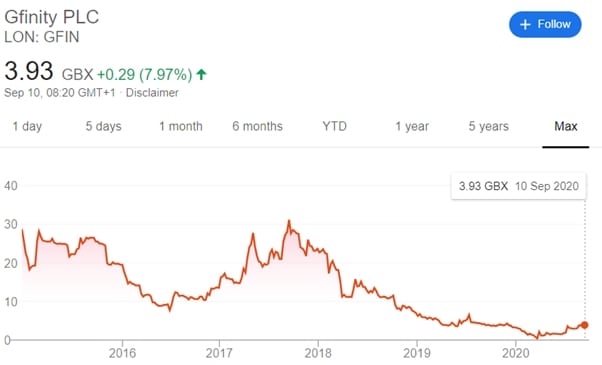 One party that stands to gain from the Guild IPO is Aim-listed investment group Blue Star Capital, which owns 11.7% of the group. Blue Star’s chairman Derek Lew also sits on the Guild board. The company could do with a boost, with its share price currently 0.23p compared to 12p on its market debut in 2004. The company’s valuation has been bumping along at rock bottom since 2012.