Beyond Meat, the vegan food tech company that has developed a plant-based burger that offers a close taste and palate alternative to real beef, has posted its first quarterly profit for the three months concluding September 28th. The company’s IPO, which took place on May 2nd, was one of the most successful in history, with the Beyond Meat share price gaining a staggering 838.4% on its IPO price of $25 by its July high of $234.9. It has since lost around 55% of those gains, which were always likely to represent something of a bubble. However, the current share price of $105.41 still represents a gain of over 320% for IPO investors. 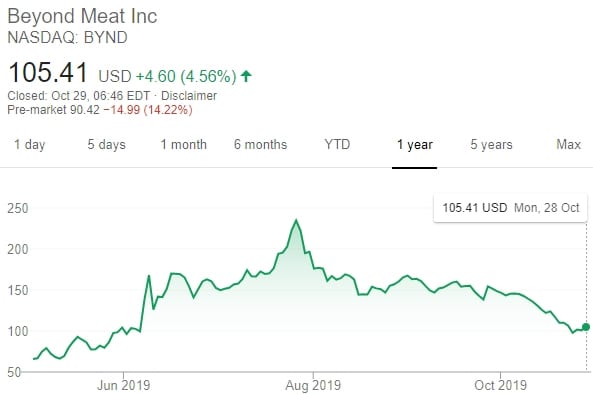 The growing awareness of plant-based meat alternatives that offer a genuine taste of the real thing, and consumer demand for them, has now translated into a first quarter of profit for Beyond Meat. A surplus of $4.1 million was recorded for the three-month period, compared to net loss of $8.1 million in 2018. That profit was achieved on revenues of $92 million – representing a massive leap on the $26.3 million over the same quarter a year earlier. In a further boost for investors, forward guidance for 2019 was upgraded to best case scenario of $275 million, when it had previously been set at $240 million.

Beyond Meat’s products recently made their debut in the UK, with its vegan-alternative beef burgers now available in the Tesco supermarket chain as well as Honest Burgers casual dining restaurant chain. The company’s share price was boosted by 4.6% in afterhours trading after the quarterly report was released. Beyond Meat’s market capitalisation stands at over $6 billion.

Beyond Meat is not, however, the only brand in the market for meat alternatives. Impossible Burger is the brand’s biggest rival. Though still a private company, its shares have reportedly changed hands in the secondary market at prices that value it at close to $5 billion.

There are other food-tech start-ups still at an earlier stage of development that are attempting to develop products from ‘lab grown’ meat. Lab grown meat is cultivated from individual cells, grown into slabs of beef, chicken, pork or seafood, in a laboratory environment. Memphis Meat and Finless Foods, which is focused on lab grown seafood products, are just two of the well-funded start-ups in the space. However, they are still working on bringing down costs enough for such products to be commercially viable.

Google-Owner Alphabet In Profits Dip As Fitbit Bid Lined Up

What The General Election Result Means For Investors:...