The share price of Anglo-Australian miner BHP is set to open gains of almost 1%, taking the company’s uplift in valuation to 14.3% since the start of the year after the company announced a record half-year dividend. Shareholders will be rewarded for a huge leap in profits over the six months to December 31 2021 to $9.4 billion from $3.9 billion a year earlier.

The world’s biggest miner, BHP has benefitted from higher commodity prices over recent months. A major coal miner, BPH’s bottom line has been boosted by soaring oil and gas prices since last autumn. Fossil fuels may get more expensive still over the first half of this year if the threat of a Russian invasion of Ukraine can’t be defused through a last-ditch diplomatic breakthrough over the next few days. 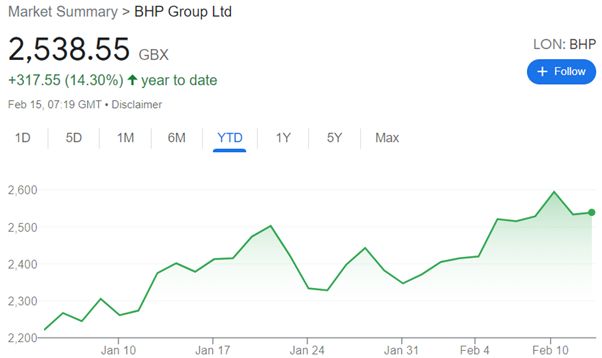 However, while it has been reaping the rewards of high coal prices, BHP’s long term strategy is to reduce its exposure to fossil fuels and move more towards metals like copper and nickel. The two metals are used heavily in renewable energy and batteries technology and are considered vital commodities in a low carbon economy.

And BHP already mines copper, whose price has risen from $2.17 lb. in March 2020 to around averages of $4.50 since early last spring. The metal was trading in a range between around $2.50 and $3.30 over the few years before the pandemic struck. Nickel prices have more than doubled since March 2020 and while the price of iron ore, another major BHP revenue stream plunged from around $225 to $85 between last July and November, it has since recovered to a little under $150.

The strong uplift in revenues and profits over the second half of last year prompted BHP to announce a $1.50 per share dividend totalling $7.6 billion to be paid out late next month. The dividend is both ahead of expectations and a new record for the miner. Including the upcoming dividend, the amount of cash returned to investors over the past year and a half will reach $22 billion.

“Our record interim dividend was supported by our reliable operating performance and continued strong markets for a number of our products.”

The impressive surge in profits marks the culmination of a period of rapid change within the company. Recent changes included a multibillion-pound deal to sell off its oil and gas business Woodside Petroleum. That deal is expected to complete later this year and another major move has been the move away from a dual listing in both Sydney and London. BHP now has a main listing in Sydney and a smaller number of shares quoted via a secondary listing in London. That change recently saw the company fall out of the FTSE 100 index.

The dividend is being paid out on the performance of the company’s continuing business and excludes profit generated by the oil and gas unit.