Mining and commodities group BHP, one of the most valuable companies listed on the London Stock Exchange with a market capitalisation of over £133 billion, is moving back to Sydney. BHP, most of whose mining operations are based in Australia, has a dual corporate structure and listings in both London and Sydney. Its primary listing is, however, in London.

Yesterday the company announced the intention to unify its corporate structure and give up its primary London listing in favour of Sydney. That would see the company leave the FTSE 100 index in a blow to fund managers and investors who have long enjoyed its healthy dividend payments. The company’s London share price has also gained around 280% since 2016, making the stock even more popular in the City. 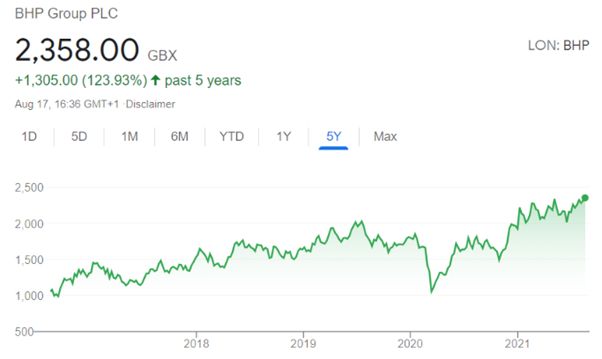 The announcement comes on the back of a particularly good day for BHP’s London share price, which saw it gain 3.4% yesterday. It was down almost 7% today in Sydney as the Asian trading session entering its final leg early this morning in Europe.

If attracting several high profile tech flotations and IPO announcements in recent months, including Deliveroo and Wise, had boosted confidence the UK is still looked on as a favourable listing destination, BHP’s call to abandon these shores will renew concerns London holds diminished appeal.

Legal & General Investment Management’s Nick Stansbury, whose company is a top 10 shareholder in the miner, commented on the news:

“Today’s announcement is very significant — with the likely outcome that BHP leaves UK indices. If this is indeed the case for UK index investors, it is our view that losing a company of the calibre of BHP is disappointing.”

“However, BHP’s proposal is supported by a robust and clearly articulated value case with the potential for investors in the UK company to benefit from the possible narrowing of discount to the Australian company.”

“It is important that UK index investors are able to realise that benefit and we will continue to review the proposal with this in mind.”

BHP Group is currently the second largest company listed on the London Stock Exchange after recently high commodities drove a rise in its value to over £130 billion. Only pharmaceuticals giant AstraZeneca is worth more. Stockbrokers estimate that around £50.6 billion of BHP’s shares are traded in the UK with the rest in Australia.

Retiring the dual company structure, in place since the company was formed by the 2001 merger between London-listed miner Billiton and Australia’s BHP will, said chief executive Mike Henry, allow for a “simpler and more agile” company. That may help it make deals and acquisitions more easily.

BHP won’t entirely exit the UK and does plan to keep a secondary listing in London. There are also practical reasons why the move makes sense, even if it is disappointing for the City. A large majority of the company’s profits are generated by the Sydney-listed business and most of its mining operations, copper, nickel, zinc, metallurgical coal and iron ore, are based in Western Australia.

London’s loss is particularly galling with the announcement made by BHP alongside the company reporting its largest ever annual profit and a record dividend payment. The company is also exiting the oil and gas sector by merging its divisions with Australian peer Woodside Petroleum.

Before the proposal can be acted upon, BHP will have to secure at least 75% of the shareholder vote from both the London and Sydney-listed businesses. UK investors might be convinced if they are able to convert their holdings to the Sydney-listed business. The London-listed company has been trading at a discount of about 20% to Australia.

On the other hand, with BHP offering a dividend yield of around 10%, UK shareholders who would face losing that may vote down the proposal. With such a large majority required the BHP board will have to be persuasive.