Global stock markets might be on their way to their worst week since the Covid-19 pandemic sparked a panic sell-off in March. But forecast-beating quarterly results yesterday from members of the FAANG group mean the drop is likely to be less severe than could have been the case.

The MSCI combined index of international developed and emerging stock markets is down 4.5% this week – its sharpest drop since March. Wall Street futures suggest the major U.S indices will open down today, with current indications for a 2% slide for the tech-heavy Nasdaq and a 1.5% drop for the S&P 500.

But the biggest tech stocks, the FAANG quintet of Facebook, Amazon, Apple, Netflix and Google (Alphabet) plus Microsoft, yesterday continued to prop up equities markets. Alphabet, Apple, Amazon and Facebook, all yesterday published their results for the quarter that ended September 30th.

They all posted analyst-beating sales growth, with Apple and Amazon notching record quarters on revenue. Even Netflix, which last week disappointed investors with slower than expected growth in subscriber numbers after two stellar quarters over the first half of the year, saw its share price boosted by its announcement it is to increase prices. The television and film streaming service’s value rose by 3.7%. 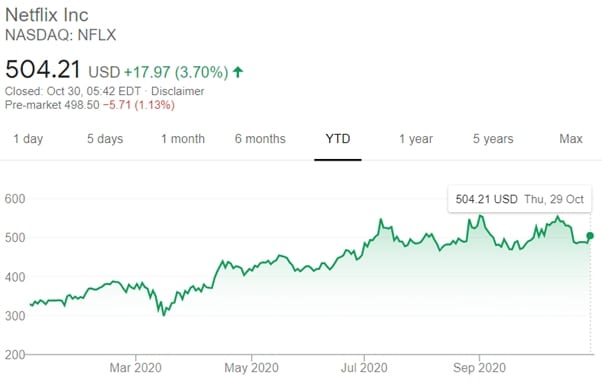 The share prices of even big tech are down this morning in afterhours trading ahead of the Friday session. But their broader performance over the pandemic, which has hit many sectors hard, has led the Nasdaq index to gains of 30% this year, despite the March stock market crash. The tech-focused index was yesterday up 1.64%. 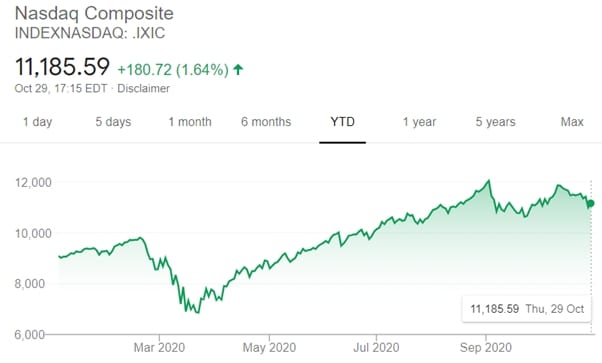 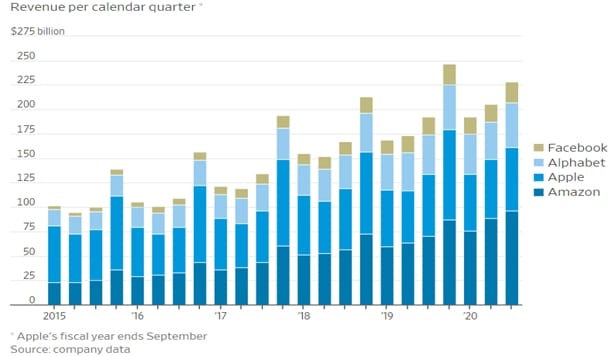 If the rest of the retail world, both online and traditional bricks-and-mortar retailers, were already wondering just how to stop the behemoth that Amazon has become, and they were, those concerns can only have increased over the course of pandemic-hit 2020.

Lockdown restrictions and a lingering wariness by consumers about unnecessarily spending time in crowded public spaces, like shops, has played perfectly into the hands of e-commerce giant Amazon. The ecommerce sector has broadly benefitted from the acceleration of the trend towards online shopping, but none more so than market leader Amazon, which is now in an even more powerful position than the company already was.

Amazon saw sales grow by a whopping 37% over its third quarter compared to the same period last year, coming in at a total of $26 billion. And the current quarter looks set to be another record breaker. Chief executive and founder Jeff Bezos told investors the company expects sales of around $112 billion this quarter, which includes the end-of-year holiday season. Mr Bezos commented:

“We’re seeing more customers than ever shopping early for their holiday gifts, which is just one of the signs that this is going to be an unprecedented holiday season.”

Amazon has added around 50% to its global head count to cope with demand but in a sign of just how accustomed big tech’s investors have become to outperformance, the company’s share price has actually slid in afterhours trading, down 1.6%. 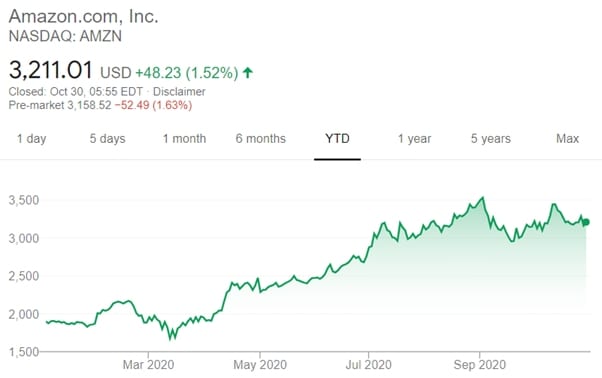 The slight downturn in Amazon’s valuation, which is up almost 75% from its closing position on December 31st 2019, can presumably be attributed to forward guidance for its operating income projection for Q4. That came in slightly below the consensus analyst target. One of only figure to not beat estimates, with the cloud computing division’s growth rate the other. The predicted operating profit, of between $1 billion and $4.5 billion, was well below estimates of $5.8 billion due to $4 billion of extra expenses related to the pandemic. The expenses are a combination of hiring large numbers of new employees, and social distancing and hygiene measures designed to ensure a safe working environment for warehouse logistics and deliveries staff.

The other blip for Amazon proved to be its AWS could computing division. Despite revenues for the quarter increasing to $11.6 million from $9 million a year ago, the figure was just slightly behind analyst estimates. As the company’s biggest engine of growth in recent years, investors are sensitive to any sign that the exponential growth rates of recent years could be slowing.

Apple also beat analyst estimates across most categories, with group-wide revenue of $64.7 billion a new record and up from $64 billion a year earlier. Profit fell to $12.7 billion from $13.7 billion but was ahead of estimates.

The brightest results for Apple were delivered by its hardware sales excluding iPhones and services. Revenues generated by iPads, Mac laptops and computers and peripherals, accessories like AirBuds wireless headphones and wearables, boosted by last month’s launch of the Watch Series 6 and Watch SE.

Mac sales accounted for $9 billion in revenue, up from $7 billion last year, and iPad sales rose to $6.8 billion from $4.7 billion thanks to the release of new models last month.  Combined sales of wearables, home devices and accessories rose to $7.9 billion from $6.5 billion a year earlier.

‘Services’, the business unit that includes Apple Pay, Apple Music, Apple TV+ and the App Store, was another outperformer, bringing $13.5 billion against estimates for $13.9 billion. The same quarter in 2019 saw services generate $12.5 billion.

The cloud within all the silver linings was, however, iPhone sales, which still account for around half of Apple’s total revenues. With the launch of the new flagship iPhone 12 models delayed until this month due to pandemic-related supply chain and manufacturing issues and some versions not available until November, sales were only generated by last year’s models. iPhone revenues for the quarter were down 21% year-on-year. 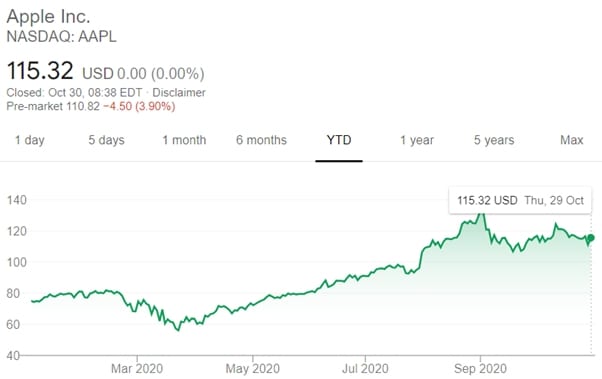 Disappointing iPhone sales, and the fact the company declined to offer any forward guidance on sales for the current quarter, other than Chief Financial Officer Luca Maestri commenting “we’re off to a great start”, dragged the Apple share price down by almost 4% in afterhours trading. The Apple share price is up 57% for the year.

Facebook also saw revenues up significantly on the same three month period of a year earlier, with growth of 22% leading to a final figure of $21.47 billion. That was particularly impressive against a recent backdrop of government scrutiny and several major companies announcing a boycott of spending on Facebook ads in response to perceived failure by the social media company to take decisive enough action against hate speech and the spreading of ‘fake news’.

Total active users of the social platform also showed overall growth and growth in every market except for its domestic U.S. base. There user numbers dipped to 255 million from 256 million a year ago.

Facebook also struck a cautious note with investors over prospects for the current and coming period. There are nerves that the underlying economic of the Covid-19 pandemic could start to more obviously filter through to ad spend.

After a dip into negative growth over the summer, the company’s first, Alphabet investors were yesterday cheered to learn that ad spend had returned to growth for Google over the most recent quarter. The better than expected bounce back saw the company’s overall revenues come in well ahead of analyst expectations.

Alphabet’s total revenues came in at $46.2 billion – a 14% improvement on last year and earnings per share were up 62% after an uncharacteristically low uptick in operating costs, which increased by just 5%. The company normally hires a large cohort of recent college graduates over the summer quarter. But this year non-essential hiring was suspended and while 4623 new staff were added in the last quarter, most hired to the Google Cloud Platform cloud computing division, that was still around 30% down on the previous year.

The Alphabet share price is up a little over 16% for the year.