Apple yesterday confounded analyst expectations to post record third-quarter results yesterday after iPhone sales came in well ahead of forecasts. Total revenues of $59.69 billion were posted for the quarter, which resulted in earnings per share of $2.58. $2.09 had been expected. The company saw revenue growth across all of its product and services category in a stellar quarter.

The surprisingly strong results have seen the Apple share price add a little over 6% in afterhours trading. The company is currently the most valuable in the world with a market capitalisation of $1.67 trillion. 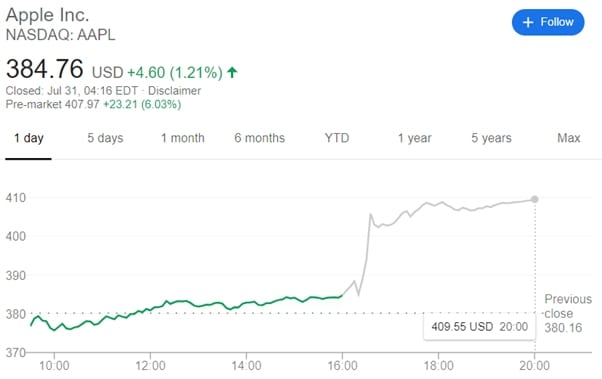 Apple’s record Q3 revenues, underpinned by iPhone sales of $26.42 billion, were particularly impressive in the context of many of the company’s stores being shut down for extended periods over lockdown. Analysts had expected $4 billion less, with sales down to $22.37 billion. That figure would have represented a slide on iPhone sales over the same period last year rather than the unexpected growth that was actually achieved.

Apple’s share price is expected to open at a new record high today when markets open on Wall Street. The astounding rise in the company’s net worth has also led it to the decision to split its stock in a four-for-one division. Announced yesterday, that means existing investors will see each of their shares broken down into 4 individual units of lower value. The move is designed to make the stock, which yesterday closed at $384.74 per share, “more accessible to a broader base of investors”.

It’s the second time Apple has divided its shares to make them more affordable as individual units, with a similar move enacted 6 years ago. In 2014, splitting the shares up saw the value of each new unit of stock fall from a little over $600 to $92.

iPhone sales were, said CEO Tim Cook, helped along by the launch of more affordable SE handsets in the spring. He commented:

“Apple’s record June quarter was driven by double-digit growth in both products and services and growth in each of our geographic segments.”

In recent years, Apple’s strategy has been to focus on growing the proportion of its revenue it generates from services, in anticipation of slowing growth for hardware revenues. Services showed 14.8% growth over the quarter, to $13.16 billion from $11.46 billion a year ago. The company has 550 million paying subscribers, up from 515 million in the previous quarter.

A cash dividend of $0.82 per share was yesterday announced and will be paid out on August 13th.

If Covid-19 pandemic lockdowns across the world have been a nightmare for many businesses, the opposite has proven to be the case for Amazon. The ecommerce giant yesterday published second quarter results that showed its revenues had risen year-on-year by a massive 40% after consumers increasingly turned towards online purchases, with little other option.

Over the 3 months between April and June, Amazon’s sales rose to $88.9 billion from $63.4 billion a year earlier. That saw net income, or profit, double to $5.2 billion. Wall Street analysts had expected a strong quarter from Amazon but the actual results were still some way ahead of forecasts. That’s seen the Amazon share price leap by around 5% in after-hours trading, ahead of markets opening today. 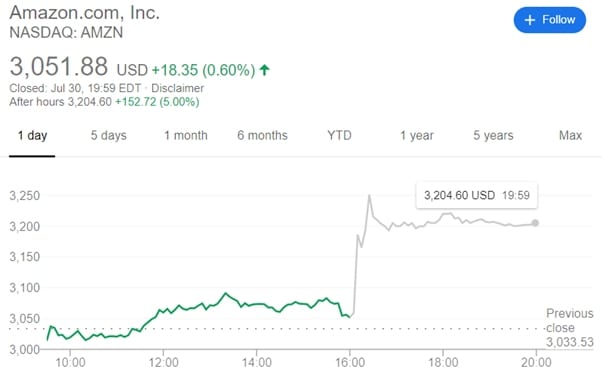 Revenues had been expected to come in at around $81.5 billion, almost $7.5 billion less than the actual total. The company had also previously offered forward guidance that a $4 billion investment needed to make its warehouses and distribution network safe for workers during the pandemic would make it difficult for profits to exceed $1.5 billion.

The company has also hired around 175,000 new employees since March to handle increased demand. 125,00 are, said chief executive Jeff Bezos, in the process of being made permanent full-time positions. That suggests Amazon expects a large part of the gains made by ecommerce over the past few months to be permanent.

With a valuation that sits at a little over $1.5 trillion, Amazon is the third most valuable company in the world. Its market capitalisation of $1.52 trillion is now only fractionally short of Microsoft’s $1.54 trillion, and it is feasible that it will overhaul its cloud computing rival over coming days, if further share price gains are achieved.

Before last night, Amazon’s share price had risen over 60% since the beginning of 2020, making it one of the biggest beneficiaries of the pandemic. In its domestic U.S. market, Amazon’s revenues increased to $55 billion from $39 billion. International revenues climbed to $23 billion from $16 billion.

The company’s AWS cloud computing unit, the world’s largest cloud services platform, saw revenues rise from $8 billion over the same period last year to $11 billion. Operating income was up by over 50% to $3.3 billion. Alongside online retail, cloud computing has been one of the sectors to gain the most from lockdowns, which has accelerated the trend of companies digitalising more of their processes and communication. Forward guidance on third-quarter sales is for a rise to between $87 billion and $93 billion. That range is the equivalent of 24% and 33% improvement on Q3 of 2019.

The Alphabet share price has remained stable in after hours trading, even inching up half a percent, despite a drop in Google’s advertising revenues over the coronavirus crisis meaning a first ever drop in profits for the technology giant. There was, however, still a hefty profit of $6.4 billion on revenues of $38.2 billion.

Income was only very slightly down on last year’s $38.9 billion over the same period a year earlier and explains why there was no stampede of investors towards the exit doors despite the historical first. Last year 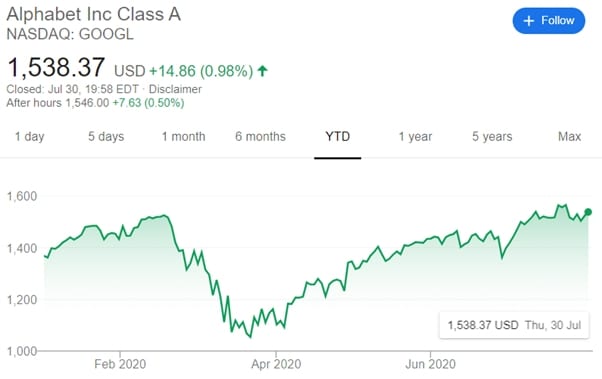 Over the course of its 22-year history, Google has never before seen a decline in year-on-year sales. But a steep drop in advertising income over the past several months saw total revenues take a 2% hit, despite the company’s cloud computing unit and other units picking up much of the slack with strong growth. However, that wasn’t quite enough to fully make up for a $2.6 billion decline in Google advertising. Until now, Google’s worst ever year-on-year result had been growth of just 0.6%.

A “difficult global economic environment” saw companies in sectors such as travel and tourism, and some consumer brands, drastically scale back ad budgets. For some the reason was financial uncertainty over the months ahead. For others it was because their industries had been temporarily effectively shut down by lockdown measures.

The majority of Alphabet’s revenues still come from advertising on the Google search engine and YouTube video-sharing platform. Alphabet was created in 2015 as a holding company for Google. It was decided a parent company would allow for clearer separation between Google and its growing brood of spin-off companies, such as self-driving car tech firm Waymo.

Alphabet chief executive Sundar Pichai did offer optimism by telling investors that the company is now seeing “early signs” of advertising spends stabilising. However, Google’s drop in advertising revenues stood in contrast to the financial report issued by Facebook, which also makes almost all of its money, more than Google as a percentage of overall revenues, from digital advertising. The social media giant’s second quarter revenues were 11% up on the same period last year, at $18.7 billion.

That still represented slowing growth, with an average of 25% year-on-year growth over the last four quarters. But with spending down, and no big fines to be paid, Facebook’s overall profit showed a remarkable 98% rise to $5.1 billion from $2.6 billion last year. The company did caution investors that they should expect muted growth over the coming period.

Economic struggles are one factor why that is likely to be the case but the social media platform is also subject to an advertiser boycott by a number of major brands who are unhappy at efforts to curb hate speech on the company’s platforms, which include Instagram and Whatsapp.

Facebook saw active user numbers across its apps increase by 14% over the three months to the end of June. The total now stands at 3.14 billion. Facebook saw 12% growth in active users to 2.7 billion.