The price of cryptocurrency Bitcoin yesterday rose above $50,000 for the first time ever. While some of those gains were briefly pared and the digital asset dropped back to below $49,000 last night, it has added another 3.3% over the past 24 hours and sits at around $51,000 at the time of writing.

Confidence is building that Bitcoin is on the verge of a tipping point into mainstream finance, fuelled by recent indications of tentative acceptance on both Wall Street and in Silicon Valley.

Broader financial market optimism based on growing belief there will be a quick economic recovery following the coronavirus pandemic also seems to be giving Bitcoin a boost. The positive correlation to improving economic sentiment contradicts claims the cryptocurrency is being viewed as an alternative to gold as a store of value. It’s currently behaving more like a riskier growth asset.

Which does raise questions around what Bitcoin’s future looks like. Will it ultimately act as a store of value, like a digital alternative to gold, a currency, or behave like a tech growth stock?

Over the past year, Bitcoin’s arguably behaved most like a high growth tech stock. Its value crashed with equity markets in late February to mid-March last year, and has then rapidly added value since autumn. But Bitcoin is not a growth stock. It generates no income and its spot value is purely based on the supply to demand ratio – like a commodity. Like gold. Which begs mid to long-term questions about what Bitcoin actually is. 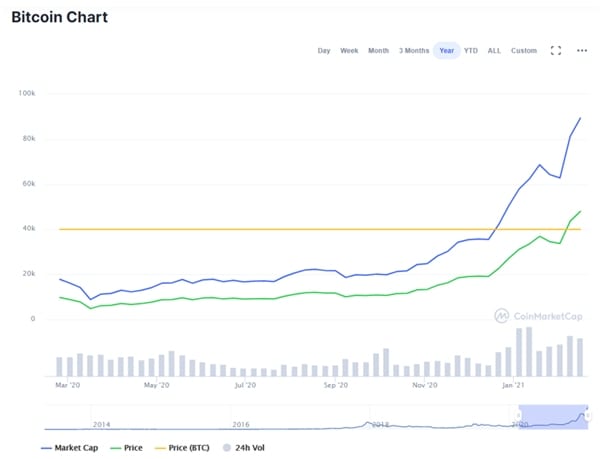 The first ever cryptocurrency when released in 2009, Bitcoin was originally intended as an alternative to fiat currency to be used to pay for goods and services. Its creator, under the pseudonym Satoshi Nakamoto, positioned it as the answer to the debasement of fiat currencies brought about by central banks printing money as they see fit as an economic stimulus measure. The total number of Bitcoin that can ever be in circulation was fixed at 21 million.

The problem is the early blockchain technology Bitcoin runs on means verifying ownership and transactions is a slow, power-hungry process. Which makes it being used as a currency for everyday transactions inefficient. Scalability in a way that could allow Bitcoin to be used by millions of people around the world for small daily financial transactions, like a genuine currency, is a question that currently has no obvious answer.

For now, it’s fair to say that Bitcoin is an asset mainly being used for speculative trading. Proponents believe that is about to change thanks to growing interest from both consumers and institutional investors. Electric car-maker Tesla made a $1.5 billion investment in Bitcoin early this month.

While that should be taken firmly in the context that Tesla boss Elon Musk has a history of spontaneous, some might say erratic, business decision, such a major company backing Bitcoin’s future has been taken seriously. Uber has also suggested it is open to customers paying in digital currencies at an undefined future moment, while Twitter has floated the idea of paying its staff in digital currencies.

Big tech does, however, clearly have a vested interest in the popularisation of assets and currencies beyond the reach of regulators and policymakers. Ultimately, it would make them practically immune to any kind of regulatory or government control.

Policymakers themselves are more cautious. Jim Bullard, president of the Federal Reserve Bank of St. Louis said earlier this week:

While Bitcoin’s future role in mainstream finance, or lack of one, is still very much to be decided, what is clear is that investors are more confident on the economy than at any time in the past decade. A Bank of America poll of 225 chief investment officers and portfolio managers at institutional investors confirmed sentiment around a global recovery is at record highs and fund managers are allocating more of their portfolios to risk assets like equities and commodities that reflect faith in the economy.