Bitcoin price is back to its volatile best after a weekend rally that saw the cryptocurrency’s value break through the $30,000 barrier to above $34,000 rapidly reversed on profit taking. Investors pocketing gains is believed to be behind a sharp drop of over $5000 over the past 24 hours, which saw the Bitcoin price fall below $29,000 again at one point.

However, Bitcoin’s correction, while sharp, appears to have been short lived. Its value was holding back above $31,000 at the time of writing, but at one point yesterday had regained a foothold at $32,000. That suggests we are most likely not on the brink of another precipitous fall, like the one that followed the 2017 rally early in 2018.

Having started 2020 at $5000, before dropping to $3000 by March as Bitcoin also succumbed to the general markets panic as the Covid-19 pandemic took hold, the original cryptocurrency gained fourfold in value over the year. Factors behind the digital asset’s renaissance are thought to be concern at inflation to follow the huge central bank stimulus packages unleashed last year, acceleration of the trend towards a digital economy and institutional investor interest.

While there is still a significant degree of scepticism among traditional investors towards Bitcoin and the cryptocurrencies sector more generally, some are starting to hedge their bets. Others institutional investors are becoming directly involved in the set-up of the quality of exchange and other pieces of trading infrastructure that would support Bitcoin becoming an established part of mainstream financial markets. 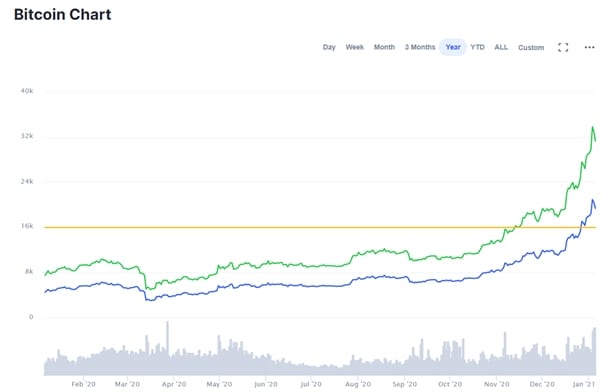 Bitcoin lost a total of around 5.5% for the day yesterday, with its valuation at around $31,700. Ether on the other hand, the world’s second most established cryptocurrency, did some catching up on its rival’s earlier gains yesterday. Its valuation reached its highest point in the three years since the 2017 rally, to climb above $1140.

One sign of the growing maturity of the cryptocurrency market is the increasing availability of derivatives used for day trading. Some analysts have suggested it was the influence of derivatives trading that hit Bitcoin’s price yesterday, and has been a major contributor to recent volatility more generally.

“Bitcoin’s implied volatility has hit a ten-month high because options traders assume that the major moves in the price action over the past ten days will continue.”

There are currently around 18.6 million Bitcoin in circulation, of a total 21 million that can ever be ‘mined’ into existence. Mining is a process based on powerful computing resources solving cryptographic puzzles as a mechanism to verify cryptocurrency transactions and update the ownership record.

Miners are ‘rewarded’ for contributing their computing power through the issue of new Bitcoins. However, once all 21 million are in circulation, the reward system will change. The built-in scarcity of Bitcoin should mean it is not vulnerable to inflation in the same way fiat currencies are, especially when central banks are printing money in large quantities. It’s the quality which has established the cryptocurrency as a digital alternative to gold, as a store of value.

Investing in digital art: faddish bubble or the...

With bond yields at historical lows, they are not a particularly attractive investment for... END_OF_DOCUMENT_TOKEN_TO_BE_REPLACED

Most of the world’s investment capital is held in the stock of companies known... END_OF_DOCUMENT_TOKEN_TO_BE_REPLACED

It’s not so long ago millennials and Gen Z were being criticised for spending... END_OF_DOCUMENT_TOKEN_TO_BE_REPLACED