Having peaked at around $69,000 just 10 weeks ago, the bitcoin price has today dropped below $34,000, its lowest level since late-July. The cryptocurrency has now seen its value fall by around 25% in just over 3 days and 50% in less than 3 months.

Extreme volatility is nothing new for the market-leading cryptocurrency but it has reached new extremes over the past couple of years. From a USD exchange value of $5200 in March 2020 after the coronavirus sell-off hit markets it was worth almost $30,000 by the end of the year. 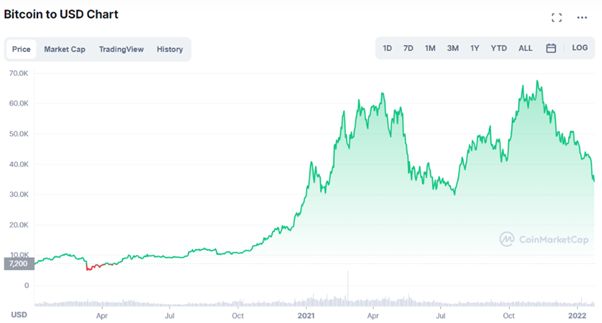 It’s been a crazy ride and what happens next this year seems to be anybody’s bet. However, bitcoin currently appears to be suffering from the same influences as other higher-risk asset classes. Fears of inflation, which at 7% in the USA has reached levels last seen in the early 1980s, and impending interest rate rises, are thought to be behind the recent sell-off.

Ethereum, the second-largest cryptocurrency by market capitalisation, is also down around 27% over the past week and hit a 6-month low at the weekend as the Fed prepares to raise interest rates at least three times this year. Other riskier assets, like growth stocks, have also suffered from an early-year sell-off.

The Federal Reserve is due to meet next week for its regular policy meeting and a 0.25% interest rates rise is expected. That’s already thought to be largely priced into markets but if the Fed offers forward guidance that confirms it believes multiple interest rates rises will still be required this year, riskier assets like cryptocurrencies could suffer from further falls. There doesn’t currently look like there is likely to be much support for Bitcoin above the $30,000 level.

There are also fears that central banks may follow China’s lead this year and move to enforce tighter regulation of digital currencies. China effectively banned them last year by telling financial institutions and companies they would be prosecuted if they had any dealings with them. Russia’s central bank also last week proposed a ban on the use and mining of cryptocurrencies within the country’s territory. The proposal suggested a ban on all cryptocurrency issuance and operations, including a ban on banks investing in cryptocurrencies, blocking the exchange of digital for fiat currencies and the introduction of legal liability for using cryptocurrency in purchases.

Other international banks, including the Bank of England, are this year expected to hold talks between each other to discuss a unified approach to rules and regulation of crypto assets.