The bitcoin price hit a three-month low of just over $42,250 yesterday, plunging from recent mid-April highs of almost $65,000. The sell-off of the original digital currency came after Elon Musk, the richest man in the world and entrepreneur behind Tesla, SpaceX, Neuralink, Open AI and The Boring Company, hinted in a tweet he may have sold off all or part of his holding.

Musk championing the digital currency and convincing the Tesla board to change its investment policy to buy $1.5 billion of bitcoin, as well as starting to accept payment in it for its electric cars, was a major catalyst in rapid gains earlier this year.

Musk’s very public February backing of bitcoin convinced many it was set to break into mainstream finance. His statement last week the bitcoin network consumed an “insane amount of energy” and that Tesla wouldn’t be transacting it until mining moved to renewable energy sources, triggered the recent bear market. Bitcoin mining requires as much electricity in a year as the country of Argentina.

Losses deepened yesterday when Musk responded to a comment on Twitter that the user “wouldn’t blame” him for now selling with “indeed”. 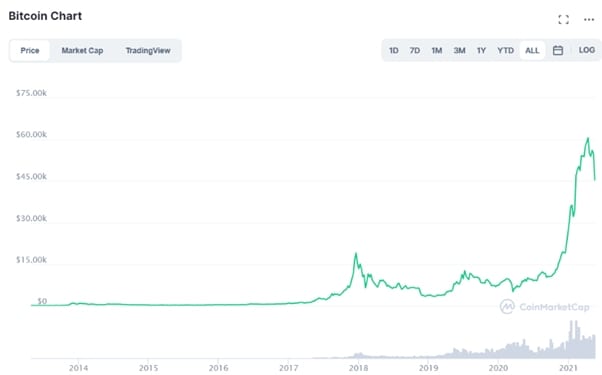 The U-turn has angered cryptocurrency advocates and some of Musk’s own ‘fans’, who saw him as a champion of a libertarian tech-centric future. Two weeks ago Tesla revealed it had sold off at least some of its original $1.5 billion investment in bitcoin for a $101 million profit.

Musk subsequently denied Tesla had sold more of its bitcoin but not everyone is convinced the world’s most valuable automaker hasn’t played the crypto market in what many would argue amounts to a “pump and dump” scheme.

“To clarify speculation, Tesla has not sold any bitcoin.”

That sparked a transient rally that saw the bitcoin price surge by 6.6% over just 23 minutes. However, by last night the cryptocurrency was down over 12% for the day to as low as $42,251.75.

Originally positioned as an alternative to fiat currencies that couldn’t be devalued by central banks printing money as part of economic stimulus policies bitcoin’s price volatility and the time and energy consumption needed for its underlying blockchain technology to verify transactions has limited the ways it has actually been used. To date bitcoin has mainly been used as either a store of value, comparable to a ‘digital gold’, or, most frequently, in speculative trading.

Bitcoin critics will now, with some justification, inevitably point out the very fact a single individual’s perceived show and withdrawal of support, even a particularly influential individual like Musk, is indicative of the challenge bitcoin and the wider cryptocurrencies market faces to establish itself as a sustainable, mainstream asset class.

Dollar steadies on expectations of low US interest rates

Sporttrade acquires license to operate in Colorado (US)

If we’re in a new commodities super cycle...

2020 was a disaster for income investors as the onset of the coronavirus crisis... END_OF_DOCUMENT_TOKEN_TO_BE_REPLACED

With gains of 21% since the beginning of the year, commodities has been the... END_OF_DOCUMENT_TOKEN_TO_BE_REPLACED

The London-listed mining company Rio Tinto has just announced it will pay out record... END_OF_DOCUMENT_TOKEN_TO_BE_REPLACED

Since he founded it as an online bookseller from the garage of his rented... END_OF_DOCUMENT_TOKEN_TO_BE_REPLACED

Last month the board of Wm Morrison, the UK’s fourth largest supermarket chain by... END_OF_DOCUMENT_TOKEN_TO_BE_REPLACED