After a late spring and early summer correction that saw the Bitcoin price drop below $30,000 in early July, the cryptocurrency has now recovered to a three-month high of over $50,000. The month-long rally was boosted again yesterday by e-payments specialist PayPal announcing it is to extend its new cryptocurrencies trading capabilities to users in the UK.

After reaching a high of $65,000 in April a sharp correction followed after China’s three main financial regulators banned companies under their jurisdiction dealing in or processing cryptocurrencies. The recent rise back above $50,000 is the first time that level has been reached again since April. PayPal’s move is seen as progress towards greater adoption in other territories – specifically the UK. 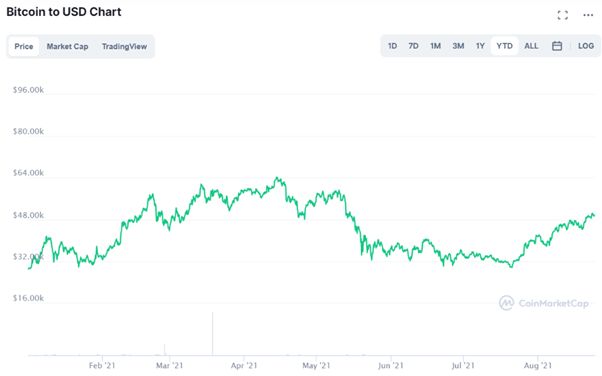 British PayPal account holders will now be able to buy, sell and hold a selection of the most popular cryptocurrencies including ether, bitcoin cash and bitcoin itself. Minimum purchases will be as little as £1.

“access, knowledge and the exploration of cryptocurrency”, which it believes “has the potential to become mainstream in the UK”.

In contrast, the UK’s Financial Conduct Authority (FCA) this year warned retail investors that investments in bitcoin and other cryptocurrencies came with a “high risk of losses” and they should “be prepared to lose all their money”. The regulator added cryptocurrencies “have no inherent value”.

The FCA is the watchdog tasked with regulating financial markets in Britain and protecting consumers from financial or investment products that may not be suitable to their personal financial circumstances.

PayPal, which first offered cryptocurrency services to U.S. account holders last year, is extending the service to the UK as its first move to expand it internationally. The online payments company has not confirmed if or when it will also support cryptocurrency payments. For now, the service is limited to trading and holding digital currencies.

“We are very deliberate about starting with initial functionality and then we’ll see where the market is going to take us.”

“We are committed to continue working closely with regulators in the UK and around the world to offer our support — and meaningfully contribute to shaping the role digital currencies will play in the future of global finance and commerce.”

PayPal’s U.S. service is run in partnership with American cryptocurrency brokerage Paxos, which will also support the UK offering.