Bitcoin’s price gains since autumn continue unabated, with $60,000 the latest new dollar exchange rate record to be set over the weekend. A new high of $61,680 was reached yesterday morning. And while the exchange rate has since dipped back below $60,000 the question has become how long the cryptocurrency can keep appreciating in value. It was worth less than $5000 just a year ago.

Bitcoin was first launched in 2009 in the immediate aftermath of the international financial crisis that rocked trust in the traditional finance and banking system. Fiat currencies that can be printed at will by central banks, diluting the value of currency already in circulation, have long had their critics. 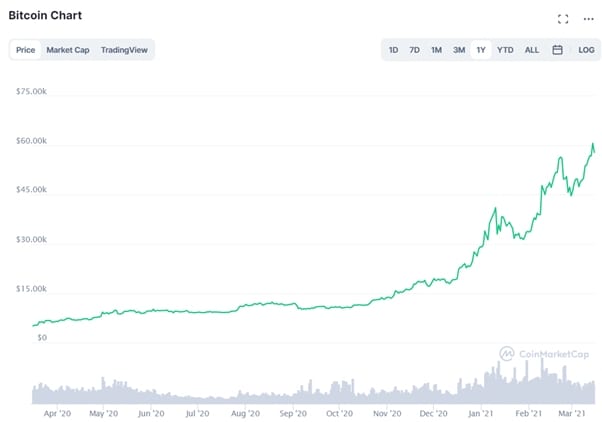 Fiat currencies have dominated since the early 1970s, when U.S. president Richard Nixon decoupled the dollar from gold. Until then, every dollar in circulation was theoretically backed by physical gold held by the Federal Reserve.

Fiat currencies give governments and central banks much more control and the ability to influence economics. The argument in favour of a fiat currency system is it helps prevent boom and bust cycles. The argument against it is it allows for ‘manipulation’ of economies by the most powerful central banks and governments and helps maintain a status quo of unequal distribution of wealth.

Bitcoin, and the other cryptocurrencies it inspired, have a fixed number of units (21 million in the case of Bitcoin) that can ever be in circulation at any one time. That theoretically protects their purchasing power from being diluted by money printing.

However, Bitcoin has become more of a speculative store of value than a currency used to pay for everyday good and services as originally intended. Limitations inherent to the version of blockchain technology it runs on means verifying transactions take time, consume large amounts of energy and the system can cope with limited volume.

Since recovering from a sell-off last February and March that reflected similar panic in stock markets as the extent of the Covid-19 pandemic started to become clear, Bitcoin’s price has multiplied more than 12 times over. Price rises have accelerated since December, with events such as electric carmaker Tesla announcing in January it had invested $1.5 billion into Bitcoin fuelling belief it is on the verge of a breakthrough into mainstream finance.

Expert opinion on what happens next is still split. Even financial markets insiders no longer seem to be willing or able to make a call. Analysts at Citi recently said they believe Bitcoin could become “the preferred currency for global trade”, which would mean displacing the dollar. The same analysts also warned a “speculative implosion” is just as likely.

Suspicions of major price manipulation, the greater anonymity cryptocurrencies afford being exploited by organised crime and the environmental impact of the amount of energy required to run the Bitcoin blockchain are among the main criticisms of the digital asset.