Cryptocurrency Bitcoin this weekend broke through the $30,000 price barrier this weekend, just 2 weeks after its value moved above $20,000 for the first time ever. The Bitcoin price peaked at $34,366.15 on Sunday morning, though a 10% drop since has brought it back down towards $30,000. The original cryptocurrency has now seen its value gain 75% in less than a month, 3 years on from its last bull market. Over the past 12 months gains sit at around 350%. 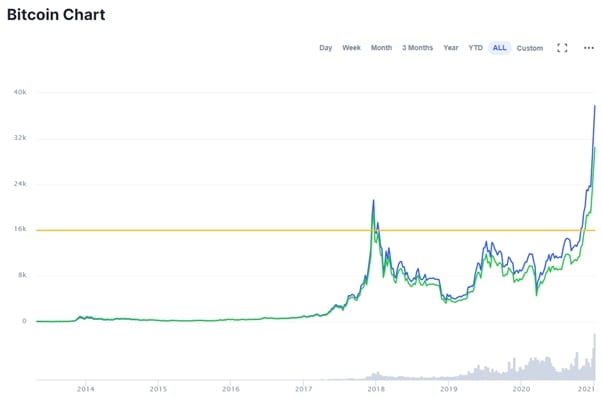 Interest in cryptocurrences, and especially Bitcoin, has resurged in recent months for a handful of reasons. The most obvious is concern the stimulus packages announced by major central banks will lead to inflation in coming years. An acceleration of the trend towards a more digital economy resulting from the pandemic is also believed to be an interest. As is greater interest from institutional investors as higher quality exchanges ready themselves for launch.

Bitcoin, which only exists as strings of code, has no physical cash form. Nor can more of it be created, due to the built-in scarcity established by its Blockchain code, created by a mysterious developer who launched the original cryptocurrency, who went by the pseudonym Satoshi Nakamoto.

When Bitcoin launched in 2008, it was worth practically nothing, before reaching dollar parity in 2011. At the beginning of 2020, a single Bitcoin was worth around $7000, having dropped in value since peaking at over $19,000 in late 2017. In March the Bitcoin price had slumped to $5000, before taking off again from September.

The price volatility of Bitcoin and other cryptocurrencies, as well as the anonymity they provide and lack of oversight from central banks and government, has seen the sector labelled the ‘Wild West’ of financial markets.

Major traditional finance figures, including Bank of England governor Andrew Bailey, have questioned if Bitcoin and other cryptocurrencies have any “intrinsic value”. But that hasn’t stopped it gradually consolidating to the point institutional investor interest is now being attracted.

“Bitcoin’s surge is no surprise to the institutional and corporate investors who put their weight behind this digital asset in 2020, which, unlike fiat and sovereign currencies, has a finite supply of 21 million coins that cannot be added to. Scarcity equals value, be it digital or not.”

Deliveroo expects the rate of growth to decelerate as lockdowns ease, but the extent... END_OF_DOCUMENT_TOKEN_TO_BE_REPLACED