Home Guides Bitcoin vs. Bitcoin Cash: What’s the difference, how the split happened and which will dominate?
Guides

Bitcoin vs. Bitcoin Cash: What’s the difference, how the split happened and which will dominate?

Anyone who follows the cryptocurrency revolution, either actively or with a more ‘general knowledge’ approach, will be aware that as of early August, there are now two cryptocurrencies that contain the Bitcoin brand within their name – Bitcoin and Bitcoin Cash. Some will have some kind of grasp on what led to Bitcoin splinter Bitcoin Cash coming into existence, many others won’t. There is even now talk of a third Bitcoin offshoot, Bitcoin Gold, potentially appearing soon. We’ll explain here the origins of why Bitcoin Cash came about, what it might means for the original Bitcoin and provide an overview of what a ‘hard fork’ in a cryptocurrency blockchain is.

The Bitcoin Civil War
The term ‘civil war’ may be a touch melodramatic. Let’s say Bitcoin Cash arose as a result of ‘irreconcilable ideological differences’ between factions of the miners and exchanges responsible for creating the cryptocurrency as to how to resolve the scalability issues bitcoin has been struggling with. The developers behind Bitcoin, or any cryptocurrency, cannot unilaterally decide to make changes to its protocol – the software it is built upon.

There needs to be majority agreement because the essence of blockchain technology is that the version of the ledger (the history of all verified Bitcoin transactions) considered to be ‘true’ is that which most copies held on the peer-to-peer network agree on. If 50.1% of all nodes (the computers that hold copies of the blockchain) hold one version of the ledger and 49.9% another, that of the majority is considered correct and the remainder will be updated to reflect that.

However, a powerful faction of Bitcoin developers did not agree the scalability solution proposed by the core development team. Without majority agreement behind their own proposal on how to improve the Bitcoin protocol, their only option was to develop it independently and then initiate a ‘hard fork’ in the blockchain. The side of the fork that proceeded on the underlying technology of the splinter group became Bitcoin Cash and the other original Bitcoin. A new cryptocurrency was born.

But to better understand this divergence we need to rewind.

Bitcoin’s Scalability Problem
Bitcoin’s scalability issue, and the arguments around how to best solve it, are the result of Bitcoin’s original design as it was launched back in 2009. Security was, probably wisely, initially prioritised by Bitcoin’s creator(s) who felt that the only way their alternative to fiat money would gain traction would be if users considered it to be secure. This security referred to both integrity of ownership (preventing theft) and the underlying blockchain technology’s vulnerability to hacking. Without going to deeply into the complex technical nitty gritty, this security was based on restricting the way Bitcoin transaction were processed and put into the peer-to-peer blockchain ledger.

The blockchain’s role is to confirm Bitcoin transactions having taken place and then distribute this information throughout the network, preventing anyone from spending the same Bitcoin twice. ‘Mining’ is the process of transaction records being verified and added to the blockchain. 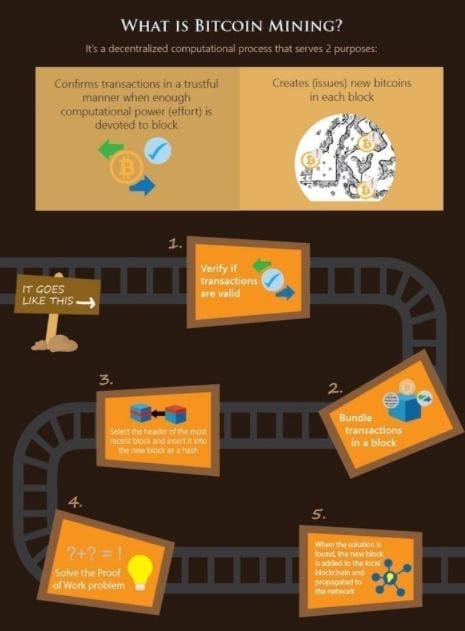 The process of verifying Bitcoin transactions, bundling them in a block and adding them to a blockchain involves solving complex mathematical problems. Solving these problems requires significant computing power which involves harnesses networks of computers, often specialist hardware built with the specific purpose of Bitcoin ‘mining’. Any individual, group of people or entity with the computational resource can mine Bitcoin. The process is designed to be resource intensive so the number of blocks added to the chain remains steady. It’s also designed around a clever market forces mechanism which scales up and down the miner ‘workforce’ as required to deal with the flow of work. Miners are rewarded by receiving new Bitcoin for every block of transactions they add to the blockchain and also receive a small fee for each Bitcoin transaction they verify. Once all 21 million Bitcoin (that’s the ceiling fixed from the launch to prevent ‘money printing’ devaluating the cryptocurrency) have been mined and are in circulation, the theory is transaction fees only will be sufficient to provide an economic case for mining. 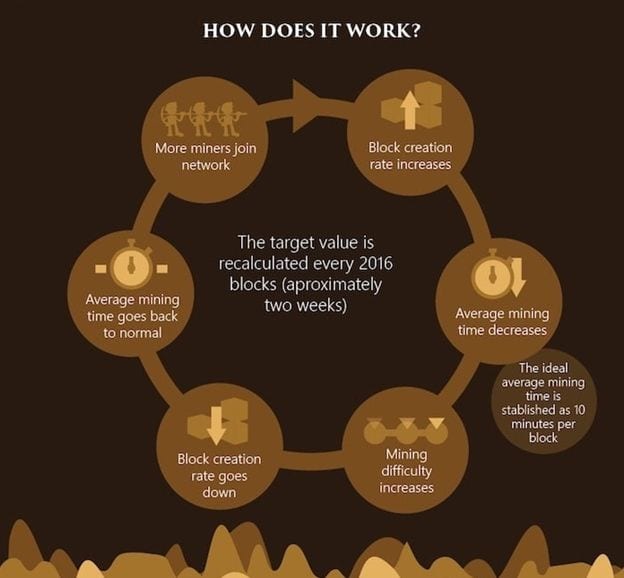 So, what’s the problem? While Bitcoin’s blockchain and mining system is ingenious, as could only be expected from a brand new and complex technology, the original iteration of the protocol hasn’t proven to be flawless and has run into issues as Bitcoin grows. The growth in the number of transactions has meant that the restriction that only allows one block to the chain every 10 minutes, and the size of blocks, so number of transactions each can consist of, being fixed, has led to a backlog as adoption has grown and the volume of transactions increased. This has meant it is taking longer and longer for Bitcoin transactions to be verified, which is a clear usability issue as it makes using bitcoin for a financial transaction less appealing.

The Rival Solutions to the Scalability Problem
The best explanation I’ve come across explaining the Bitcoin blockchain scalability issue is that of a writer that goes by ‘Technophrenia’ and published on TheConversation.com. Technophrenia uses the metaphor of a sheet of paper on which every Bitcoin transaction is written – the ledger. The information on each transaction includes the date, time and amount of the transfer and wallet addresses of the sender and recipient. It also includes two signatures – one declaring the sender does own the Bitcoin being sent and one declaring that the sender now wishes to spend some of their Bitcoin. These signatures take up quite a lot of space on the piece of paper ie. the block’s data storage capacity. When the piece of paper, the block, is full it is added to the blockchain and any subsequent transactions are added to a new piece of paper.

Bitcoin’s core developers suggested that each transaction could be split between two sheets of paper. On the first, the transaction information would be recorded and on the second the corresponding signatures. The two complementary sheets of paper would then be filed together. Blockchain would become two parallel chains allowing each block to consist of more transactions, solving the backlog issue.

The splinter faction of developers behind Bitcoin cash considered this solution to be a ‘hack’ that compromised blockchain as a technology. Their solution was simply to double the size of the sheet of paper, which could then subsequently be doubled up again to a limit of 8 times the size of the original sheet as transaction volumes grew.

The ‘Hard Fork’ and Bitcoin Cash
Bitcoin’s blockchain technology is open source software, which means changes can be made and become the standard if there is consensus within the community ie. more than 50% of nodes verify the changes. Because Bitcoin Cash did not have that critical mass of support, when the rebel ‘ViaBTC’ mining pool produced a 1.9 MB Bitcoin Cash block on August 1st 2017, it was ‘not valid on the legacy Bitcoin network. This market a clean break and the birth of Bitcoin Cash’. This was how the hard fork was announced by the official Bitcoin Cash website.

Up until the creation new Bitcoin Cash block, Bitcoin and Bitcoin Cash have the same blockchain history. The new Bitcoin Cash block is the first of the alternative fork, from which point the two became distinct cryptocurrencies. Initially most exchanges and wallets were not compatible with Bitcoin Cash, meaning that it was difficult to make transactions using it. However, a number are now accepting it and the alternative fork has survived and is slowly consolidating in terms of supporting infrastructure, making it a feasible cryptocurrency.

What Happens to Bitcoin Cash Now?
Basically, because there is so little by way of historical comparables and cryptocurrencies are such a new market, no one really knows. Bitcoin Cash could go on to establish itself to some degree or other or it could fade into obscurity with Bitcoin Cash units becoming worthless.

It really all depends upon how successful those behind the fork are in establishing the necessary infrastructure (getting enough exchanges and wallets to accept Bitcoin Cash) and traction (vendors and retailers accepting payment in it and holders using it). The chart below shows how Bitcoin Cash has fared since August. While it may appear as though the price is trending down towards obscurity it is still too early to say and it could stabilise and start to move in the opposite direction again. 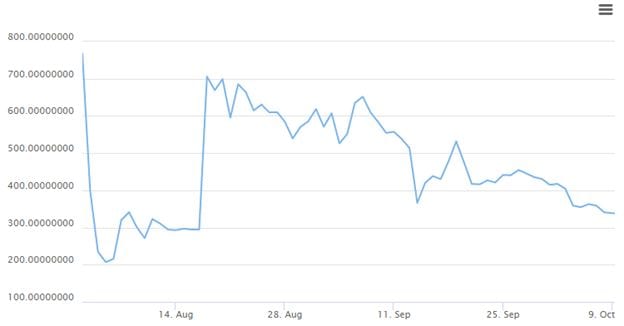 Bitcoin is not the first cryptocurrency to experience a hard fork resulting in a new and distinct currency. Ethereum, the second most successful cryptocurrency by market share and one many believe could displace Bitcoin’s dominance in the future, also experienced a hard fork in 2016. The majority of the Ethereum community reached consensus on altering the blockchain to return a huge number of stolen Ether units to their original owner – a VC fund. Some disagreed and insisted that the immutability of the blockchain should not be compromised under any circumstances, even a security breach leading to large scale theft.

The dominant Ethereum fork has remained strong but the Ethereum Classic side of the fork, supported by the ‘immutability’ camp has survived, though it trades at between 5% and 10% of the value of Ethereum.

However, predicting a similar future for Bitcoin Cash is pure speculation. Our understanding of the dynamics and economics of hard forking and the factors influencing their outcome is limited by the lack of historical precedents. The Ethereum case demonstrates that a hard fork can, at least in the short term, lead to two viable cryptocurrencies

Cryptocurrency forks may become as common and practical as corporate spinoffs eg., Paypal being spun out of Ebay as a standalone company. Jian Li, a technology consultant specialising in blockchain and software engineering believes so. Writing for the Hackernoon blog, Li posits:

“the freedom to fork enables the experimentation and permissionless innovation which ultimately create value and grows the size of the overall cryptocurrency pie”.

It’s not impossible that the Bitcoin Cash camp’s solution to the scalability issue will be judged by the market as superior to that of Bitcoin, propelling the fork to dominance over time. It could just as easily dwindle into extinction or trundle along at a relatively low value in comparison to the dominant fork, like Ethereum Classic. Whatever happens, the Bitcoin Cash fork provides another precedent and one way or another becomes part of the long road the original cryptocurrency must tread if it is to eventually fully establish itself and reach ‘maturity’.

Biggest IPO in History Approaches but Will You Be Able to Buy Shares?

Time to Prepare Your Stocks and Shares ISA for the Next Financial Markets Slump?

Bitcoin, cryptocurrencies and digital assets 2021: will we...

Inheritance Tax – A Guide To Preventing Your...

A Guide to Tax Efficient Investing via EIS/SEIS

Is The $150 Billion Cannabis Industry The Investment...

The Runaway Rise of Private Capital

Pensions: Why and How You Should be Paying...

A by-product of this adoption is increased access to the asset, with at least... END_OF_DOCUMENT_TOKEN_TO_BE_REPLACED

At the annual meeting of shareholders of the Daily Journal Corporation, Munger explained why... END_OF_DOCUMENT_TOKEN_TO_BE_REPLACED