Online fast fashion retailer Boohoo has responded to a short attack launched against its share price by a notorious hedge fund by acquiring the 33% stake it didn’t hold in Pretty Little Thing. The deal was valued at £330 million, despite claims earlier this week that it could cost the company as much as £1 billion.

On Tuesday the short trade specialist hedge fund Shadow Fall released a report accusing Boohoo of misleading investors over the profits of the Pretty Little Thing Brand, as well as free cash flow figures. The fund’s main argument was that Pretty Little Thing’s figures have been included in Boohoo’s reports as though the company owned 100% of the company, when 33% was still held by Umar Kamani, the son of Boohoo co-founder Mahmud Kamani.

The move to acquire 100% control of the company before the 2022 expiration of Boohoo’s option to buy has been described by analysts as removing a major ‘overhang’ on the stock. The market clearly agreed, responding to the news to push the Boohoo share price 15% higher to a record 384.5p. Boohoo is now valued at £4.7 billion. 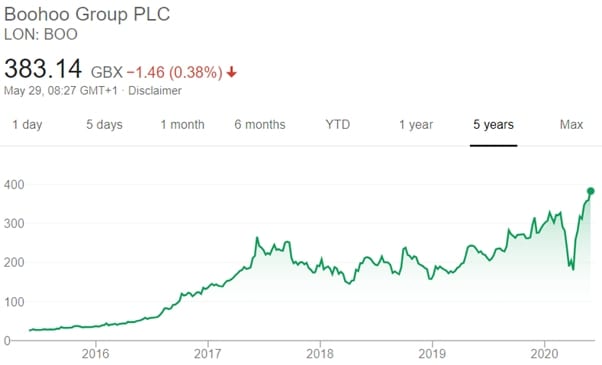 While it is a claim that is likely to be viewed with a degree of healthy scepticism by investors and observers, Boohoo chief executive John Lytlle insisted the timing of the deal “certainly wasn’t”, a response to the Shadow Fall attack just days before. He insists the deal had already been in the pipeline “for some time”, with serious negotiations ongoing over the past few months.

While it would be far from a surprise to learn that, with Boohoo’s option to buy expiring in 2022, moves to buy the remaining 33% of Pretty Little Thing were afoot, the presumption of most will be that the completion of the deal has been accelerated as a response to the Shadow Fall report. Mr Lyttle also highlighted that the Covid-19 pandemic’s boost to the trend towards online shopping meant that the acquisition made sense at this particular moment in time. He commented that “the pandemic has spurred the shift to online shopping, so it is a salient time to do the deal”.

The £330 million price tag on the deal will be split between £161 million in cash and £107 million in shares. That will leave the younger Mr Kamani with a an approximately 2.6% stake in Boohoo. The deal is being funded through the issue of 48.3 million new shares worth £162 million.

The fact that the new issue comes less than two weeks after another £200 million was raised from investors to target “distressed retail opportunities”,  is a further indicator the buy-out’s timeline has been brought forward.