The Boohoo share price has fallen by over 20% over the past week of trading with the slide compounding a tough 2021 for the fast fashion retailer that has seen it lose 37.5% of its market capitalisation. The recent losses were catalysed by last week’s announcement the company’s profits had fallen by around two thirds as a result of acquisitions and, more importantly, rising costs.

Like most online-first retailers, the Covid-19 pandemic has generally been kind to Boohoo and sales have boomed over the past year and a half while bricks-and-mortar stores have spent extended periods unable to open. However, while the e-commerce sector is expected to hold on to a healthy portion of the market share gains it has made over the pandemic period, the end of lockdown restrictions was always going to see a slowdown in growth. 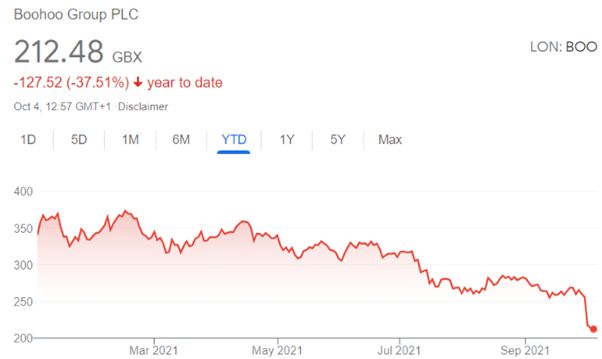 Last week Boohoo told investors that slowdown is now taking effect and revised its sales growth forecast down from 20% from previous guidance for between 20% and 25%. Earnings margins were also reduced due to increased logistics costs.

Logistics issues and spiralling transport costs are also dragging on U.S. sales growth, said Boohoo’s chief executive John Lyttle. Delivery times in North America have been extended to ten days from the usual five due to shipping delays and air freight, shipping and distribution costs increased by £26 million over the first half of the year. However, these difficulties are expected to ease next year as global supply chains get back on track.

Profits were also hit by £20 million of restructuring costs booked after the acquisitions of the Dorothy Perkins, Wallis and Burton brands, e-commerce assets and stock (stores will not be retained) from the collapsed Arcadia Group.

“We are not going to have a kneejerk response to the City reaction, we are a business that is growing and our focus is on the medium and long term, not one quarter.”

Since listing in 2014 Boohoo has grown quickly thanks to a spate of brand acquisitions including online rivals Nasty Gal and Miss Pap as well as struggling high street names Karen Millen, Coast, Oasis and the recent additions from the Arcadia stable.

The drastic slowdown in sales growth from 32% over the first quarter to 9% over the three months to the end of August was put down to the pandemic meaning fewer events for the younger shoppers that are the company’s main demographic to buy new outfits for. The summer, said Lyttle, featured fewer festivals and trips abroad than normal and shoppers mainly bought “back to the office and back-to-school” styles.

The net result of the various headwinds saw statutory pre-tax profit slump by 64% to £24.6 million compared to £68 million a year ago. There was also a 46% drop on the same period 2 years ago before the pandemic hit. Adjusted earnings were down 5% to £85.1 million compared to a year earlier.