The share price of Boohoo, the online-only fast fashion retailer, has plunged by over 16% so far today, wiping almost £600 million from the company’s valuation. Investors appear to have taken fright at the apparent decision of company auditor PricewaterhouseCoopers (PwC) to quit the lucrative role. Boohoo has confirmed that PwC will stand down from the role and a tender run for a new auditor, with the incumbent not taking part.

Boohoo’s share price reached a record high in June, bouncing back strongly from the market-wide March sell-off provoked by the coronavirus crisis. As an online-only retailer, the company has benefitted from lock down restrictions accelerating the trend towards online shopping.

However, a large portion of those gains was wiped out in July after a scandal erupted over working conditions at Leicester factories that supply some of Boohoo’s clothing lines. The company had again clawed back a good part of those losses since, before a new October share price slide that has culminated in today’s precipitous drop. 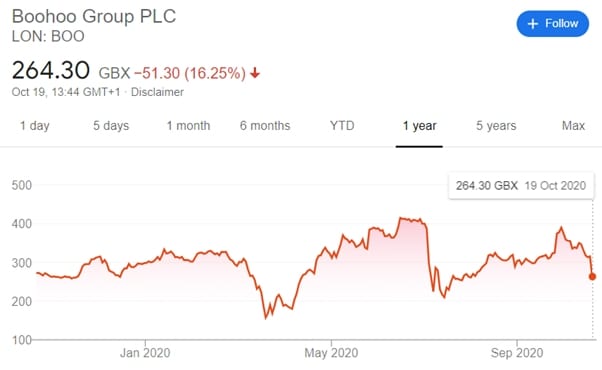 News broke over the weekend that PwC was stepping down as the fashion retailer’s auditor, with investor concern over the reasons why manifesting themselves in today’s steep losses. PwC is the UK’s largest auditing company by revenue and has audited Boohoo’s finances since 2014.

The ‘Big 4’ consultant’s resignation is thought to be motivated by concerns over the reputational risk of continuing as auditor of Boohoo. As well as the supplier working conditions scandal, the hedge fund Shadowfall, a notorious ‘shorter’, has a significant position betting against the Boohoo share price. In May, the fund released a lengthy report questioning the company’s accounting practises.

However, reports currently suggest it is concerns over Boohoo’s supply chain that was the primary reason behind PwC’s decision. It has signed off on the company’s accounts for the past six years and will continue as auditor until the completion of the tender to enstate a replacement.

While neither party has officially confirmed whose decision it was to part ways, the feeling is that all of the evidence points to PwC as provoking the move. Matthew Earl, managing partner at Shadowfall commented:

“Since Boohoo’s shareholders overwhelmingly voted as recently in June to re-appoint PwC for another year, it seems to us that it is PwC who has elected to part ways.”

94% of voting investors backed PwC’s reappointment when the initial decision was put to them in June.

Boohoo last month published an investigation into working conditions at its Leicester suppliers, that it had commissioned Alison Levitt QC to head up. The review concluded that senior members of the Boohoo board had been aware, by last December at latest, that there were instances of unacceptable working conditions in certain supplier factories. And that the company did not respond to the situation quickly enough.

However, the review also concluded that Boohoo “did not deliberately allow poor conditions and low pay to exist within its supply chain, nor did it intentionally profit from them”.

A number of analysts, including Andy Wade at Jefferies, have already come out today to state the turn of events around the company’s auditor does not affect their overall confidence in the company. Mr Wade said he was retaining his “buy”, recommendation on the stock, reasoning:

“It seems unclear to us which came first — the launch of a competitive tender process by Boohoo or the indication by PwC of its intention to resign. Regardless, we see no suggestion of any financial impropriety and would be inclined to view this as short-term noise in the context of the investment case.”