The BP share price has dropped by 3.75% today despite the oil and gas giant announcing a third quarter net profit of $3.3 billion which came in ahead of analyst forecasts for $3.1 billion. The company also announced plans to return more cash to shareholders in the form of a new $1.25 billion share buyback.

The net profit figure, which represents a massive leap on the $86 million registered over the same three-month period a year earlier, was driven by much higher commodity prices. Brent crude averaged a price per barrel of $73.51 over the third quarter compared to $42.94 last year. The company also indicated its gas business had recorded a “very strong trading result” thanks to traders taking advantage of price volatility. 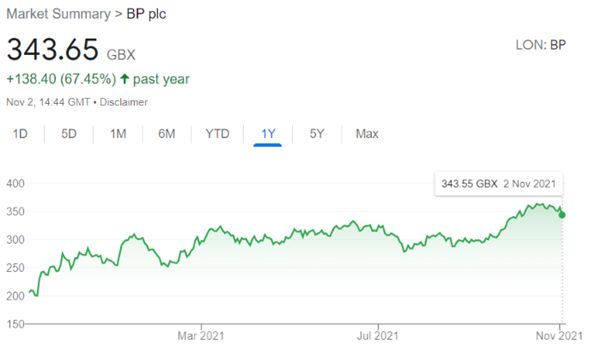 BP expects oil and gas prices to remain “tight” over the peak consumption months ahead over the winter period, which should spell good news for its fourth-quarter revenues and over the first quarter of 2022. Oil prices may additionally benefit from certain customers switching demand from gas due to its current abnormally high-cost levels.

It’s that positive outlook that has led BP to the decision to buy back $1.25 billion in shares despite only generating around $900 million of surplus cash flow over the previous quarter. It had previously committed to spending 60% of surplus cash flow for buybacks this year which means the move goes above and beyond that promise.

The $1.25 billion share buyback is a reduction on the $1.4 billion bought back since second-quarter results, but in line with guidance that $1 billion worth would be bought back if oil prices stayed about $60-a-barrel.

BP chief executive Bernard Looney commented on “another good quarter for BP” with:

“Rising commodity prices certainly helped, but I am most pleased that quarter by quarter we’re doing what we said we would — delivering significant cash to strengthen our finances, grow distributions to shareholders and invest in our strategic transformation.”

BP currently pumps out the equivalent of 3.3 million barrels of oil per day from its projects around the world but is in the midst of a radical transformation into a low-carbon energy provider. It has set a target of reaching a net zero carbon footprint by 2050 and making significant progress towards that goal by 2030, though critics say the pace of the transformation must be further front-loaded.

BP recorded a net loss of $2.9 billion for the quarter based on the industry-standard replacement-cost metric. However, like London-listed peer Royal Dutch Shell that is explained by an “accounting mismatch” caused by hedging positions on gas prices that brought a $6 billion charge.

BP has maintained its quarterly dividend at 5.46 cents per share after the unexpected hike last quarter.