The BP share price was up 1.5% this morning after the announcement yesterday the oil and gas giant is to invest almost £1 billion for the rights to build offshore windfarms. BP, which is pursuing the goal of achieving ‘net zero’ status as an emitter of the gases global warming is attributed to, won an auction for the rights held by the Crown Estate that will result in billions of revenue to the Treasury and Queen. 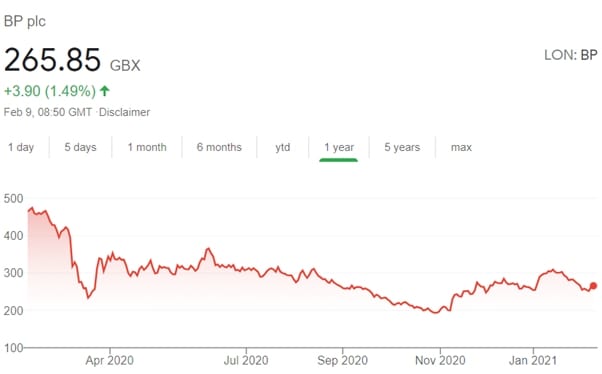 Winning the rights represents BP’s first big move into the UK offshore wind sector. The bid was made as a joint venture with Germany’s EnBW. The pair have secured two seabed leases that will see giant offshore windfarms anchored in the Irish Sea. The price paid for both leases significantly surpassed industry forecasts.

Including the two leases secured by BP and EnBW, the Crown Estate sold six Irish Sea seabed leases. Between them, the windfarm capacity expected to be built should support close to eight gigawatts of electricity production. That’s enough to power over seven million homes in the UK.

However, industry analysts believe UK consumers are likely to end up footing higher energy bills as a result of the transition towards a mainly renewables energy mix. Luke Clark, commenting on behalf of the trade body RenewableUK told The Daily Telegraph newspaper yesterday:

“If you are a developer, the question is how do you cover those additional costs. Do you take a hit to your return on investment or, when you get to the point where you want to develop your project and you are bidding for one of the power generation contracts, do you bid in at a higher price to recoup the additional cost? Those costs have to be recouped at some point.”

The successful bidders for the other four leases up were grabs included RWE, the German power giants, and French oil group Total. The companies will invest a total of around £880 million a year for options to develop windfarms at the leased sites. The fees will be paid for a minimum of three years and maximum of ten. That will see the Crown Estate bank between £2.6 billion and £8.8 billion.

BP and EnBW will stump up fees of £462 million a year to hold the option to develop on the two sites they have been awarded leases on. They expect those fees to be paid for around four years, with construction of the facilities to have commenced by that point. That adds up to a total investment in the options of £924 million each. That income for the Crown Estate will be paid out to the Treasury, which passes on 25% as a sovereign grant in the benefit of Buckingham Palace.

One of the world’s largest oil and gas producers, BP’s fossil fuels output was the equivalent of 3.5 million barrels of oil-a-day in 2020. However, last year’s collapse in oil prices, a poorer mid-term outlook for the industry and regulatory and investor pressures has seen the company accelerate its investment in renewables. Its strategy is to transition to an energy mix dominated by green energy, in pursuit of its target of becoming a net zero producer by 2050.

For its part, the UK government has committed to the UK having built 40GW of offshore windfarm capacity by 2030. As of early 2021 that capacity stands at a little over 10GW.

The Crown Estate auction of Irish Sea seabed leases was its first in over ten years and interest was considerable. The auction was heavily oversubscribed. RenewableUK deputy chief executive Melanie Onn commented:

“While demand for new offshore wind projects has never been higher, too few sites were made available to meet this demand.”

In a defence of the level of options fees being charged to the auction’s successful bidders, Crown Estate chief executive Dan Labbad argued the finite nature of the resource meant the estate had been morally obliged to “capture the right proportion of that for the nation”.

BP expects the planned windfarms that could consist of 17-megawatt capacity turbines to be operational by 2028.