The BP share price has gained almost 3% today after the energy giant announced its best quarterly profit in 14 years and Boris Johnson ruled out the possibility of a windfall tax on the sector. Oil and gas prices heightened by Russia’s invasion of Ukraine drove BP’s underlying profits for the first three months of the year to $6.2 billion (£4.95 billion).

The figure, more than double the profit recorded over the same period a year earlier, led Labour leader Sir Keir Starmer to state the case for a windfall tax on energy companies had been reinforced. Chancellor Rishi Sunak also seemed to signal a shift in his position on the concept of a windfall tax he had previously been quick to shoot down when he last week said one could be introduced if energy companies don’t increase investment in UK-based renewables projects and new North Sea exploration. 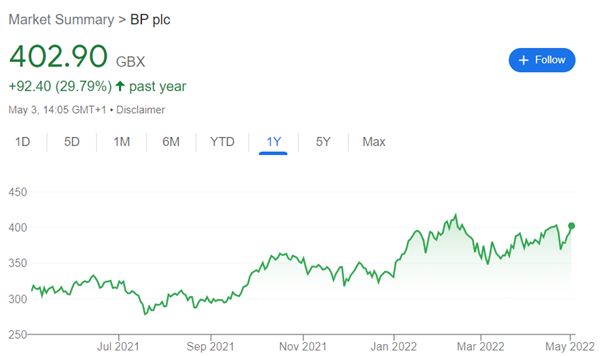 However, in an appearance on ITV’s Good Morning Britain this morning, prime minister Boris Johnson ruled a windfall tax out, saying:

“If you put a windfall tax on the energy companies, what that means is that you discourage them from making the investments that we want to see that will, in the end, keep energy price prices lower for everybody.”

“We have a short-term hit caused by the spike in energy prices across the world. If we respond by driving up prices and costs across the board in this country, responding by the government stepping in and driving up inflation, that will hit everybody.”

Labour’s Starmer, however, was quick to add an opposition view when speaking on Times Radio this morning. He called the government’s response to bills “going through the roof” an “abject failure”, continuing:

“We’ve got positive arguments about a windfall tax, the oil and gas companies in the North Sea made more profit than they were expecting because of the high global prices, we say use that to take up to £600 off the energy bills.”

The argument over the merits of a windfall tax that could be put towards temporarily easing household pain over soaring energy bills versus leaving it to energy companies to reinvest their outsized profits in their expensive transitions towards net zero energy production is unlikely to die down any time soon. But in the meanwhile, at least BP shareholders will benefit with the company planning a £2 billion share buyback.

The record quarterly profit could also have been a record quarterly loss of £18 billion if BP had stuck to the industry standard metric after the company booked a one-off £19 billion charge. That was the result of the company’s decision to pull out of Russia, effectively giving up the 20% stake it holds in Russian state-backed oil company Rosneft. The decision not to include the charge was explained by BP chief executive Bernard Looney as having been taken because it does not affect the company’s strategy, financial frame or “expectations for shareholder distributions”.

“how you will reinvest profits, double down on investments in the clean energy transition and importantly accelerate and maximise domestic oil and gas production”.

The company’s answer detailed plans for an £18 billion investment in UK-based offshore wind, North Sea oil and gas and an electric vehicle charging network to be made by 2030. However, that was also BP’s investment plan before the recent leap in profits and the company said it plans to stick to a commitment to use 60% of free cash flow to buy shares back from investors. The other 40% will, said BP, be put towards strengthening its balance sheet.

£3.3 billion of surplus cash was generated over the first quarter after dividends were paid and planned capital investments funded. That will fund $2.5 billion of share buybacks this quarter compared to $1.6 billion last quarter.

The BP share price is up almost 30% for the year-to-date.