Home Latest News Brexit and The Pound: What’s In Store For GBP Over Another Key Week?
Latest News

Brexit and The Pound: What’s In Store For GBP Over Another Key Week?

The value of the pound sterling, to give our national currency its official title, has been far more volatile that its historical norm since ‘Brexit’ burst onto the scene. From the lead up to the Brexit referendum until now, as we approach crunch time in early January, the pound’s value has been see-sawing up and down against other major world currencies such as the dollar and euro.

Average volatility has never been so high over an extended period and swinging exchange rates make planning difficult for everyone from businesses who import and export, individuals travelling for business or pleasure and investors.

The only people who really welcome this level of volatility are short term currency traders. Those investing online in CFDs and Forex, record profits or losses based on how well they are able to anticipate the direction of the pound or other currencies over the course of hours and days. With another huge week for Brexit ahead, traders will today be trying to anticipate the potential outcomes from tomorrow’s big parliamentary vote on Theresa May’s Brexit deal and how the pound is likely to react to them. Will the vote provoke a rally this week or a sell-off, sending the value of the pound plunging?

There were some clues on Friday as the pound gained in strength, suggesting the market wants the UK’s currency to strengthen at the slightest hint of more Brexit clarity. However, there is plenty of opportunity for a significant drop in value. A Bloomberg survey of 11 banks suggest professional currency traders think this week could see the pound strengthen to its highest level since May last year or drop to its weakest level since the referendum in June 2016. That’s how polarised reactions are likely to be depending upon the outcome. It’s currently considered unlikely that May will manage to get her deal through parliament. However, the trickier part of the forecast is what happens if she doesn’t. 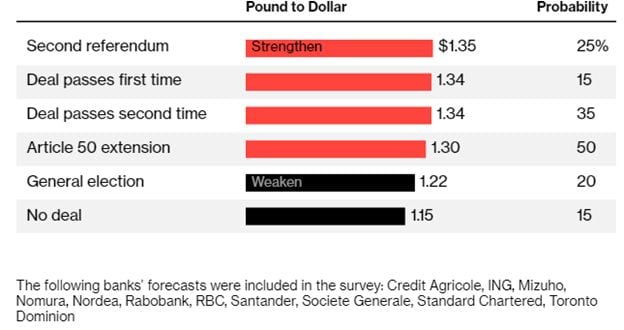 There could be an Article 50 extension, she might be able to try again, a 2nd referendum could be called or even a general election. Or we could push ahead with Brexit anyway on a ‘no deal’ basis. If positive progress is made, which could even mean just a delay as far as currency markets appear to be concerned, the pound is expected to strengthen to around $1.36-$1.40 from current levels of $1.28.

However, for investors in London-listed equities, a strong pound rally could be a negative. The FTSE 100 has actually benefited from the weaker pound over the past couple of years, which has made UK exports cheaper and more attractive as well as meaning revenues earned in other currencies convert into more pounds when converted back. This helps boosts the balance sheets of UK companies which often earn the majority of their revenues abroad.
Whichever way it goes this week, it seems almost certain to be one of the most volatile for GBP since the Brexit referendum vote itself.

The Stocks Set To Bounce Back If U.S.-China Trade Talks Result in Breakthrough