The Meggit share price yesterday closed to gains of 56.7%, a jump of 266p, after the British aerospace group accepted a £6.3 billion takeover offer submitted by American peer Parker-Hannifin. The bid is the latest in a series of London-listed companies being targeted, and often taken over, by larger U.S. rivals or private equity groups.

An agreement was also reached yesterday between Smiths, another British engineering business, and the American private equity group TA Associates, for the latter to buy its medical division for net cash proceed of £1.3 billion. The Smith’s share price has plunged by over 6% in early trading this morning. 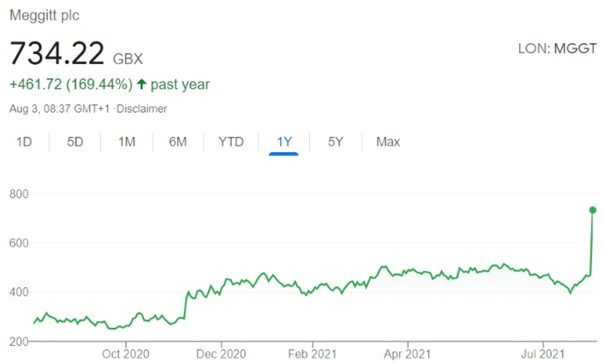 However, it is the accepted bid for Meggitt that has drawn attention. And not only that of investors and financial markets observers but the UK government. Already concerned about the spate of takeovers that have seen previously UK-owned assets fall into foreign ownership, the government yesterday said it will take an “active interest” in the deal.  Demands on jobs and future investment in the company in exchange for not blocking the acquisition as against the national interest are expected.

On the surface, at a 71% premium to Meggitt’s Friday closing price, Parker-Hannifin’s 800p-a-share bid reflects fair value for shareholders. Smiths Group also justified the sale of the medical unit as “a better outcome for shareholders than a demerger”, which had been the alternative plan and already being pursued.

Coventry-based Meggitt makes sensors, landing gear components and other kit for plane-builders including Airbus and Boeing as well as working on military programmes including Lockheed Martin F-35 fighters and the BAE Systems Typhoon. The large majority of revenues come from civil aviation, meaning a tough period for the company over the coronavirus crisis. Meggitt employs 9000 staff internationally with 2300 based in the UK.

British defence and security sector engineer Ultra Electronics, founded in 1920, was also recently taken over by an American company, private equity group Advent. Snapped up for £2.6 billion last year, the Cobham-based company also makes components for military and civil aircraft. Another peer going the same way has raised fears over jobs and investment in an important sector for the UK, as well as for defence supply chain security.

Business secretary Kwasi Kwarteng last week indicated his department may intervene in the Ultra deal on national security concerns and he may yet decide to subject the Meggitt deal to a similar level of scrutiny. He will first seek insight from the American bidders over their commitment to protecting Meggit’s UK workforce and local investment plans.

Parker-Hannifin has already contacted the UK government and promised to keep Meggitt’s UK headquarters, maintain a majority of Brits on the company’s board and up research and development spending by 20% on current levels for at least the next five years, market conditions permitting. The company has also promised UK employee numbers will not fall from current levels, though there may be some restructuring with back-office jobs at most risk.