Blue Prism, the British company that develops automation software, is considering a dual listing on Wall Street that could eventually lead the way to the tech star abandoning London altogether. Chief executive Jason Kingdon believes the higher valuations American investors give subscription software companies (SaaS – software-as-a-service), is an opportunity missed for his company.

As a result, he feels the capital injection the company needs to fully grasp the “enormous” opportunity the market is presenting, may necessitate a move to the USA. In what has been described as an “attack”, on the London market, Mr Kingdon, 58, called the London market “too illiquid and too small”. He also thinks investors lack enough of an understanding of the SaaS sector, and as a result are not valuing software companies in an “appropriate manner”.

He is convinced that if Blue Prism were currently listed on the Nasdaq or NYSE, it would be worth between “two and eight times more”, than investors on the London Stock Exchange are valuing it. He said:

The London market’s response to Mr Kingdon’s statements has been a sharp drop in the Blue Prism share price, which is down just under 4% today, adding to losses at the tail end of last week. The company is currently worth £1.36 billion. 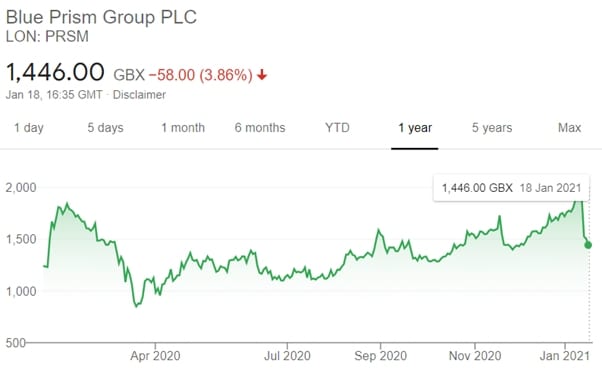 Initially, Blue Prism is considering applying for a secondary listing on Wall Street, in addition to its current London listing. However, Mr Kingdon has hinted a full relocation is not out of the question, commenting:

“I don’t think for all the shareholders . . . and all the stakeholders associated with Blue Prism, that we’re in the right place.”

Warrington, Cheshire-based Blue Prism is a global leader in robotic process automation. It provides software that allows for custom coding of robotics, to change or tweak their functionality. It’s a sector that is quickly growing as more and more repetitive tasks once executed by human workers are outsourced to software.

The “phenomenal” rate of its sector’s growth means that Blue Prism feels like it needs to raise fresh capital to strike while the iron is hot. And that, says Mr Kingdon, is “something that we need to do in conjunction with knowledgeable stakeholders”.

The Blue Prism share price hasn’t done too badly on the London Stock Exchange, rising more than tenfold since its 2016 IPO. The company was founded in 2001, and Mr Kingdon joined in 2008, before being appointed chief executive last year. He owns 6% of the company.

In the USA especially, investors are hugely enthusiastic about the long-term recurring revenues that can be generated by high quality SaaS companies. There, the average valuation to forward-looking annual revenues is a multiple of 15. Many of Blue Prism’s peers trade on multiples of x30 or higher, while in London the company trades at a valuation multiple of seven times its annual sales.

Over the year to the end of October 2020, Blue Prism’s revenues grew by 46% to £141 million. However, after admitting that growth is expected to slow to 24% this year, the company’s value plunged by a quarter. That is what appears to have hardened Mr Kingdon’s attitude to its current shareholder pool. His response to the drop in value bristled with resentment:

“We’ve given very conservative guidance and that is the reaction — it’s an overreaction, some might say. It’s becoming impossible to live with that. We’re getting back to the days when if you’re serious about technology and having a global proposition, then there is only way place to take that proposition.”