Autolus Therapeutics, a British biotechnology start-up spun out of University College London in 2014 and listed on the Nasdaq exchange in 2018, has secured a $250 million investment from U.S. investment giants Blackstone. $150 million of the funds will go towards the development and commercialisation of obecabtagene autoleucel, obe-cel for short. Another $100 million will be used by Blackstone to acquire Autolus’s American depository shares through a private placement.

The investment in Autolus, originally created by the Wellcome Trust-financed life sciences investment firm Syncona, is one of the biggest private financing deals to date in the UK’s biotech sector. The Autolus Therapeautics share price leapt 29% earlier this week when the news was announced. Some of those gains have since been given up but the company’s valuation is still up by over 10% this week.

Autolus Therapeutics is developing T-cell therapy technology designed to harness the immune system of cancer sufferers to fight back against the disease. Despite the company’s recent share price gains its current $479 million valuation is still over 40% below its listing price. 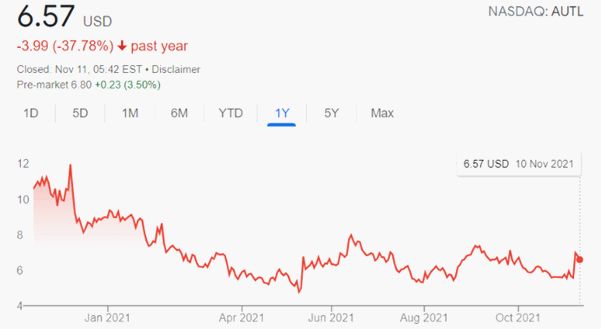 Autolus was initially financed and spun out of FTSE 250 life sciences company Syncona, founded in 2012 with the backing of seed funding from the Wellcome Trust. Wellcome is a not-for-profit charitable foundation established to invest in promising life sciences and other start-ups focused on positive health outcomes. Syncona still owns 23% of Autolus’s outstanding shares making it the biotech’s largest single shareholder. Syncona invested £30 million in Autolus as seed funds. The company’s investment strategy is to take equity stakes in biotechnology and research companies and helps them commercialise by recruiting management teams and remaining operationally involved in all the companies that make up its portfolio.

Another of Syncona’s holdings, gene therapy company Gyroscope which is working on a treatment for geographic atrophy which causes blindness, also secured a major investment earlier this week. French pharma group Sanofi put up $60 million. The Syncona share price is up almost 23% over the past month.

Autolus’s obe-cel cancer therapy is currently in clinical trials for the treatment of patients with adult acute lymphoblastic leukaemia. Earlier stage trials are also assessing its potential as a therapy for B-cell non-Hodgkin’s lymphoma. Hopes are high with Syncona chief executive Martin Murphy describing obe-cel as “a potentially best-in-class product that could represent a transformational treatment”.

The therapy is based on programming T-cells, white blood cells focused on identifying and ridding the body of foreign particles, to start the “serial killing of target cancer cells”.

In return for its investment in obe-cel Blackstone will bank a capped “single digit” royalty payment on future revenues generated by the treatment plus bonus milestone payments based on net sales.