The BT share price has gained over 3% today, taking returns for the year-to-date to almost 40% and the company’s highest valuation since January 2020. The boost to the once public telecoms giant comes after a surprise statement this morning announcing French-Israeli billionaire Patrick Drahi has acquired a 12.1% stake in the group through his privately owned French telecom Altice. 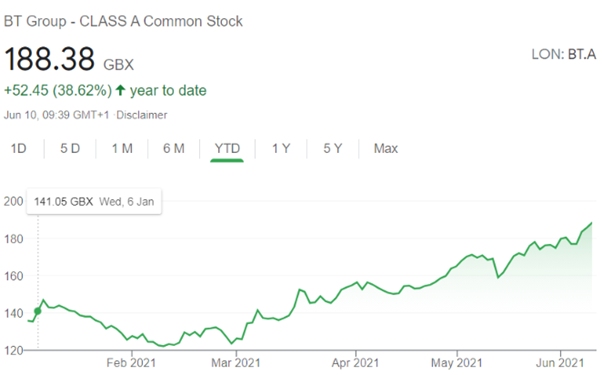 Altice’s 12.1% stake in BT was worth £2.2 billion based on the company’s share price at market close yesterday at a market capitalisation of £18 billion. Altice’s statement said that the new investor “holds the board and management team of BT in high regard and is supportive of their strategy”.

Altice said it was encouraged by the opportunity represented by BT’s leading role in delivering the UK’s high-speed internet infrastructure, commenting:

“Altice UK has made this significant investment in BT as it believes that it has a compelling opportunity to deliver one of the UK government’s most important policies, namely the substantial expansion of access to a full-fibre, gigabit-capable broadband network throughout the UK.”

“Altice believes that the UK provides a sound environment for substantial long-term investment. This is supported by the current regulatory framework, which offers BT the appropriate incentives to make the necessary investments.”

Drahi, who founded Altice, took the company private again in January of this year in a $7.3 billion deal. Altice was founded in 2001 and originally grew through the acquisition of a number of French regional cable television operators. After acquisitions-fuelled expansion to the USA, Israel and latterly Portugal, the company went public in 2014. Having struggled for a number of years under the debt burden built up through its aggressive approach to acquisitions Drahi succeeded in a bid to take it private again early this year.

Drahi, whose private wealth is estimated at over $12 billion, also owns the 275-year-old auction house Sotheby’s, which he acquired for $2.6 billion in 2019.

For its part, BT welcomed the new investor, saying it valued all those

“who recognise the long-term value of our business and the important role it plays in the UK. We are making good progress in delivering our strategy and plan.”

Once a state monopoly telecom, BT was privatised in 1984 during Thatcher’s drive at the time to sell off valuable state-owned companies. Its businesses include the sports broadcaster BT Sport, which is rumoured to be up for sale to the right offer, the EE mobile network and its broadband infrastructure unit Openreach, which appears to have been the main attraction for Altice.

BT’s near 40% share price gains over 2021 have been catalysed by a number of developments that have offered investors greater clarity on its future prospects.  It is now more confident in forecasting potential returns from the £15 billion investment Openreach is making in expanding its full-fibre broadband infrastructure in the UK. The target is for the full-fibre service to connect 25 million properties by the end of 2026. While it had been exploring joint venture opportunities to share the upfront cost the telecom recently said it would be able to fund the huge project independently.

BT was always recently awarded a £1.5 billion tax benefit as a result of the UK government’s “super-deduction” policy designed to stimulate private infrastructure investment. The tax benefit was awarded via the government’s 5G spectrum auction and because it reduced its pension deficit by over £3 billion to around £8 billion.

BT is currently recruiting a new chairman to replace Jan du Plessis, who will step down from the role later this year.

Dollar rises but stays near a five-month low

With bond yields at historical lows, they are not a particularly attractive investment for... END_OF_DOCUMENT_TOKEN_TO_BE_REPLACED

Most of the world’s investment capital is held in the stock of companies known... END_OF_DOCUMENT_TOKEN_TO_BE_REPLACED

It’s not so long ago millennials and Gen Z were being criticised for spending... END_OF_DOCUMENT_TOKEN_TO_BE_REPLACED

After a year that strongly favoured risk-on investments as stimulus cash flooded markets and... END_OF_DOCUMENT_TOKEN_TO_BE_REPLACED