The Easyjet share price has dipped 1.5% today after the London-listed short-haul budget airline reported a loss of £400 million over the quarter that included Christmas. Despite only around a quarter of its regular routes remaining in operation over the period, a step taken in an attempt to stem losses, that will now be reduced to just 10% of the company’s pre-Covid schedule.

However, chief executive Johan Lundgren’s bullish position on the prospects of conditions improving from the Easter holidays one sent the company’s valuation up 4.6% yesterday. 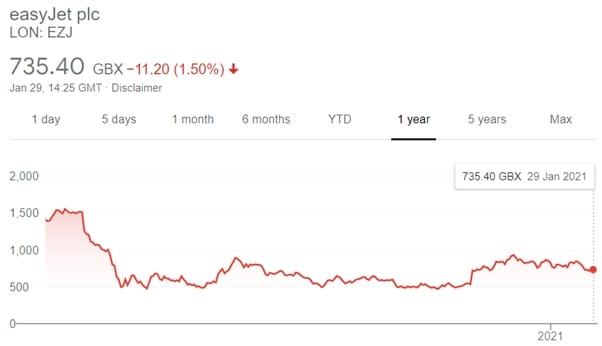 Easyjet’s value has more than halved since a steep sell-off early last year as markets panicked as the severity of the coronavirus pandemic’s potential consequences started to become clear. Since travel restrictions came into place, Easyjet has been burning through cash at a rate of roughly £520 million a quarter, or £6 million a day, despite culling 3000 staff.

The company’s remaining cash reserves stand at £2.5 million. Those will see it through 2021, especially if costs can be reduced further. But if Easyjet is not confident it will be flying profitably again by then it will have to raise more money. It may have to anyway to be in a solid financial position when the world returns to something approaching normality.

Over the 3 months between October and December, Easyjet flew a total of 23,000 flights. That amounts to an 83% reduction on services flown over the same period in 2019. And the flights that did operate did so at 65% capacity, compared to a normal average of 91%. That saw passenger numbers over the period down 87% year-on-year.

Revenues, averaging out at £59 per passenger, were £165 million. Costs came in at £588 million. The company cut its capacity to 24% in October in response to changing government restrictions and the looming second wave of the pandemic. However, that was further reduced to just 8% when the UK reimposed lockdown measures in November. That rose to 17% as restrictions eased around the Christmas period, though a majority of flights were domestic routes running in the UK, France and Italy, rather than cross-border trips.

Easyjet admits it currently has no idea what to expect from the current financial year. Its statement read:

“Based on current travel restrictions in the markets in which we operate, Easyjet expects to fly no more than circa 10 per cent of [January to March] 2019 capacity for the second quarter of the 2021 financial year.”

“At this stage, given the continued level of short-term uncertainty, it would not be appropriate to provide any further financial guidance for the 2021 financial year. Customers are booking at a later stage and visibility remains limited.”

While adding the significant caveat “only if the travel restrictions are unwound”, Easyjet chief executive Johan Lundgren struck a confident tone about his hopes of getting his company’s 300-strong fleet back in the skies. He hopes to run more services over the Easter holidays, and then rebuild the airline’s schedule for the financially crucial summer period. Easyjet believes the summer season has the potential to be a strong one due to pent up demand – if government restrictions are relaxed by then to allow it to go ahead, with Mr Lundgren stating:

“The majority of our fleet is in flight-ready mode but we have to make the call on a rolling basis.”

Copy trading – what is it and should you try it or is it a high-risk gamble?