The upmarket British fashion brand is expected to announce this week that it will become the latest FTSE 100 firm to cancel its dividend. Talks with major shareholders over changes to the company’s executive pay and bonuses structure are also reportedly ongoing. The company’s share price has risen by a little over 4.5% today, roughly in line with broader gains for the FTSE 100. 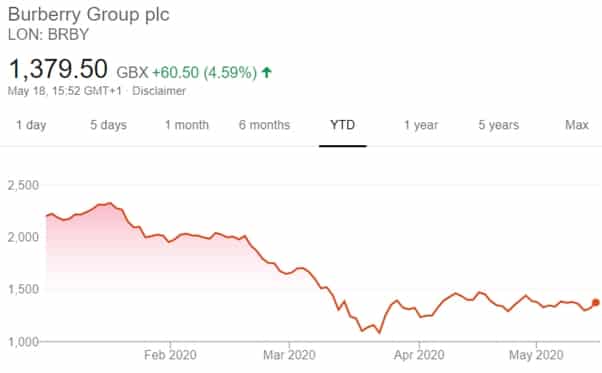 The company has taken a significant hit as a result of the coronavirus pandemic with store sales down 30% over the first quarter of the year compared to the same period in 2019. While the impact of the lockdown didn’t seriously begin to bite in Europe and the USA until early March, the effects were felt much earlier in China and Southeast Asia – a major market for Burberry.

Russ Mould, investment director at online stockbrokers and investment platform AJ Bell, told The Times that analysts had been forecasting a dividend payment of 33.8p a share over the full year, compared to 42.5p in 2019. That meant the final dividend payout would be 22.5p compared to 31.5p a year ago. Last year Burberry paid shareholders a total of £171 million.

Cutting the dividend now will halt a ten-year run of dividend growth for the fashion brand, most famous for its trademark trenchcoat and ‘tartan’ material design. FTSE 100 companies have already cancelled a total of £24.8 billion in dividend payments that were due to be made, according to research conducted by the stock broker Peel Hunt.

Burberry has, however, made a significant contribution to the effort to fight the spread of the Covid-19 pandemic. The company reassigned its factory in Castleford, West Yorkshire to the manufacture of personal protection equipment badly needed by NHS staff, care workers and other key workers. The factory normally produces Burberry trenchcoats.

Talks with investors around controversial changes to the way CEO Marco Gobbetti is paid are said to be ongoing. Mr Gobbetti took a 20% ‘haircut’ to his £1.1 million salary for the period covering April to June. The changes also cover other company executives. The board’s proposal is that its usual long-term incentive plan is replaced by a restricted share plan. Last year Mr Gobbetti was paid £3.9m between his salary and bonuses.

The proposal would see the overall number of shares awarded to executives drop but they would be handed out more regularly and without being attached to performance targets. In Mr Gobbetti’s case, the changes would see the amount of shares he receives he receives cut in half from its current level of 325% of his salary.

However, not all investors are convinced the strategic change is a good one. They agree with the motive to reduce the number of restrictive shares awarded but still want final totals to be decided by performance. For executives whose performance in the context of company revenues and profits is currently largely outside of their control, this is understandably not an especially attractive counter-offer.

Burberry is due to announce its trading results on Friday, when adjusted operating profit for the financial year recently concluded is expected to have dropped 23% to £337 million. If changes to executive pay and shares awards go through, they will be published next month along with the company’s annual report.