The Burberry share price has plunged 14% in early trading today after the shock announcement by the British fashion brand chief executive Marco Gobbetti will leave the company. With almost 10% also wiped off the share price yesterday after the news broke, Burberry has lost almost a quarter of it market value in under 24 hours.

The blow of losing Gobbetti has particularly stung because he will move directly to rival Italian fashion house Salvatore Ferragamo. And there are fears he could now attempt to take Burberry creative director Riccardo Tisci with him. Ferragamo’s recently lost its own designer, who is yet to be replaced, and the pair have a long history of working together. Prior to teaming up at Burberry, Gobbetti and Tisci spent time together at Givenchy. 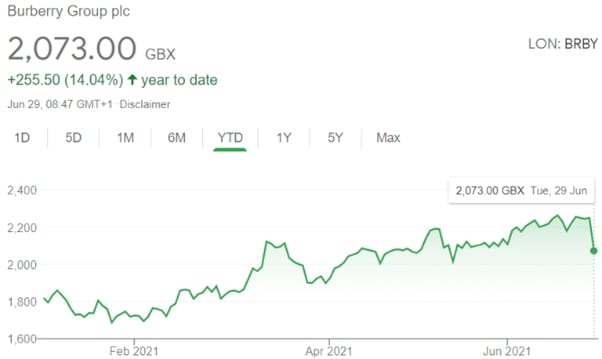 Tisci has been a success as Burberry’s creative director with his new collections improving sales since he joined the company in 2018. Just last year Gobbetti moved to deny rumours Tisci could be leaving. This time it could be him trying to tempt him out of the door.

Rumours of potential takeover bids have also regularly swirled around Burberry in recent years and there has been some early speculation the hit to the company’s share price over the past 24 hours could encourage bids if a bounceback isn’t quick. Renewed takeover speculation, say analysts at Citi, “could be disruptive internally while the board is looking for a new chief executive”.

Gobbetti will take up his new role as chief executive of Ferragamo as soon as Burberry releases him from his contractual obligations. That’s expected to be later this year with him working with Burberry chairman Gerry Murphy for at least a few months to ensure an “orderly transition”.

Burberry indicated that family reasons were the major factor in Gobbetti’s decision to jump ship, saying the move would allow him to move back to Italy where he will be closer to his family.

The UK’s biggest luxury brand, Burberry’s history stretches back to 1856 when the company was founded by Thomas Burberry as a gentleman’s outfitters. Mr Burberry was also the inventor of gabardine, the tightly woven waterproof fabric used in the company’s emblematic trenchcoats.

The Burberry share price had gained 37% since Mr Gobbetti was appointed a little less than five years ago. He had previous spells in charge of luxury groups Moschino, Celine and Givenchy before replacing Christopher Baliey as chief executive of the British brand. Bailey had been the fashion house’s longest-serving creative director before taking the top business job.

Gobbetti had refocused Burberry to appeal more to a younger audience and took the brand further upmarket. However, while revenues grew healthily under his watch some of that was at the expense of profit margins, which shrank. But he is considered to have been a successful chief executive and Burberry were reportedly surprised and disappointed to hear he wished to leave to take up the offer from Ferragamo.

“The board and I are naturally disappointed by Marco’s decision, but we understand and fully respect his desire to return to Italy after nearly 20 years abroad.”