The market has hit the Burberry share price with a near 6% loss today despite the fact the emblematic British fashion house reported a recovery in retail sales to above pre-pandemic levels. A bounceback in full-price sales to £479 million boosted the total retail figure to 1% over the same period in 2019. The total was 90% higher than the period in 2020 when stores were mainly closed down due to lockdown measures. 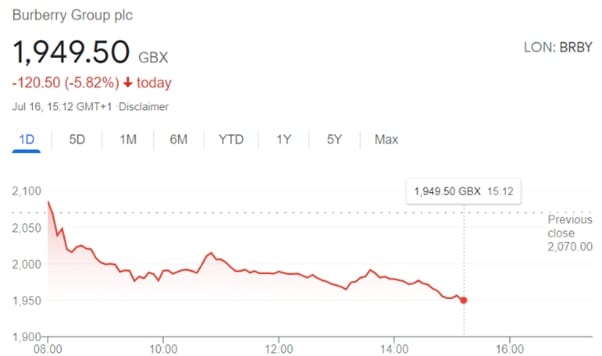 The figure was also well ahead of a forecast for £455 million made by brokerage Jefferies and an improvement on the fourth quarter when sales were still down 5% on 2019 levels. The best performing categories were shoes, sales of which more than tripled compared to last year and leather goods which were over double. Price cuts have also been tapered and several outlet stores closed.

Burberry attributed the upturn to “new, local, young customers”, paying full price in the company’s strongest markets in the Americas, South Korea and China. The performance in those markets helped compensate for a 40% drop in sales in the UK and Europe, where stores have continued to experience periods where they were shut down. A lack of tourists, especially from Asia, was also a major factor for lower sales in the UK and Europe, where foreign visitors are typically enthusiastic Burberry’s shoppers.

Wholesale revenues are also expected to show a strong recovery with the order book indicating an improvement of 60% over the first half of the year compared to 2020. Earlier forward guidance had been for 50% growth. Full-year guidance for the whole group has been held constant.

The hit to the share price is presumably disappointment no update was provided on the hunt for a replacement for chief executive Marco Gobbetti who will leave Burberry later this year. £1 billion was wiped off the Burberry valuation after the surprise announcement Gobbetti would leave the company at the end of the year to take up the chief executive role at rival Italian fashion house Salvatore Ferragamo.

Gobbetti’s decision, largely influenced by his desire to take up the opportunity to return home to Italy, was a major blow after he drove an upturn in sales growth and initiated a strategy of taking the Burberry brand further upmarket.

She also batted away suggestions an interim chief executive could be required, asserting the current senior leadership team was “fully capable” of maintaining forward momentum until a permanent successor was appointed. She declined to comment when asked if she had applied for the job.