The Burberry share price has gained 2% today after the British fashion house announced the recruitment of Versace boss Jonathan Akeroyd as its new chief executive. Akeroyd, who also led Burberry’s British peer Alexander McQueen for 12 years before moving to Versace as its chief executive, will assume his new role with the FTSE 100 company on April 1st.

The agreement with Akeroyd continues a game of musical chairs between British and Italian fashion groups after Burberry’s current boss Marco Gobbetti was poached by Italian luxury goods holding Salvatore Ferragamo. That shock announcement saw Burberry’s valuation plunge by £1 billion in June. Gobbetti is currently tying things up in London and will move back to Italy after he leaves the business at the end of the calendar year. 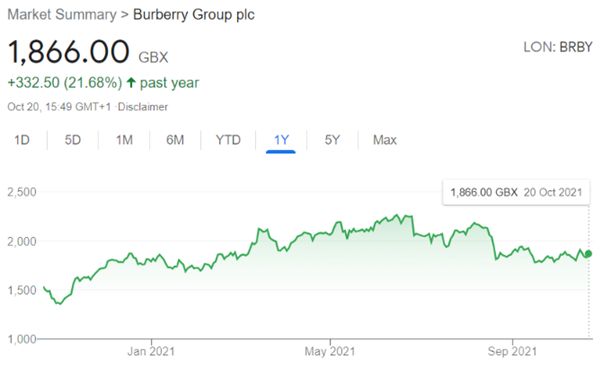 There will be a four-month gap between Gobbetti vacating the Burberry chief executive role and Akeroyd, who is a Brit, taking up the reigns April.

The choice of Akeroyd has been met with general approval by analysts and the market, which drove the Burberry share price up 4% earlier in the day before gains were subsequently pared back. Bernstein analyst Luca Solca described Akeroyd’s experience of dealing with “challenging situations” including revitalising Alexander McQueen by promoting Sarah Burton to the role of chief designer a “good fit”.

The choice has also gone some way to alleviating fears that Burberry’s chief designer Riccardo Tisci would follow fellow Italian Gobbetti out of the company, especially if he didn’t immediately see eye to eye with his replacement. Solca dismissed that risk by pointing out Akeroyd has experience “dealing with Donatella Versace — say no more!”

Akeroyd has worked his way up through the ranks of fashion retail from early years as a store manager for Harrods where he rose to merchandising director before taking over at Alexander McQueen. He commented on news of his appointment with:

“I am honoured to be joining Burberry as chief executive officer. I have long admired Burberry’s position as the most iconic British luxury brand and I have a deep affection for its storied heritage. I am looking forward to returning to London where I first built my career in the luxury industry to join a talented team with ambitious plans for the future and a strong platform to accelerate growth.”

Burberry chairman Gerry Murphy commented on behalf of the company:

“Jonathan is an experienced leader with a strong track record in building global luxury fashion brands and driving profitable growth. He shares our values and our ambition to build on Burberry’s unique British creative heritage and his deep luxury and fashion industry expertise will be key to advancing the next phase of Burberry’s evolution.”

Mr Akeroyd’s package will be an annual salary of £1.1 million, cash benefits of £50,000 and £6 million of share and cash awards that will vest over the next four years and are compensation for incentives he gives up by leaving Versace. He will also be eligible for a maximum bonus package worth 300% of salary and a Burberry share plan award worth 162.5% of his salary.