The Centrica share price is up 4.4% for the day into the early afternoon as the London-listed British Gas owner became the latest energy company to announce it expects bumper profits thanks to soaring energy prices. The FTSE 250 constituent has North Sea gas and nuclear businesses that are being boosted by the prices surge as well as running British Gas, the UK’s largest household energy supplier.

Today’s share price gains, taking Centrica’s market capitalisation growth to over 32% for the past twelve months, came after the company told investors that its expects its profits to come in at the top end of its guidance. And that earnings per share could double thanks to strong results from its energy trading division capitalising on market volatility as well as being able to sell energy at higher prices. 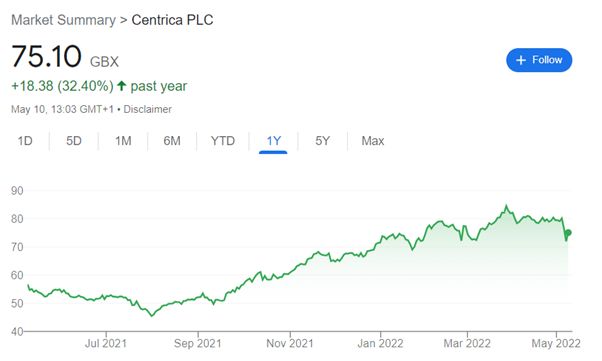 Centrica’s unscheduled trading update told shareholders a “strong operational performance in the first four months of 2022” means it now “expects full year adjusted earnings per share to be around the top of the range” of recent analyst forecasts. Forecasts are for between 6.7p to 10.8p compared to 4.1p per share last year.

As well as owning British Gas, which supplies gas, electricity and a boiler repair and home services to UK households and businesses, Centrica also holds a 20% stake in the UK’s nuclear plants and co-owns Spirit Energy which produces oil and gas in the North Sea. Spirit is currently in the process of selling off Norwegian oil and gas assets to focus on UK gas fields.

Centrica’s 2021 adjusted operating profit of £948 million was already double its 2020 figure and analysts at Investec are tipping it to come in at as high as £1.4 billion this year. It will be boosted by “strong” volumes at its “nuclear and gas production assets in the UK” which will see it benefit from high gas and electricity prices.

Like other energy companies, Centrica’s upstream activities are benefitting from high energy commodity prices which are expected to persist for the next couple of years. However, there will be negative effect of higher energy prices and general inflation for the company as well. The group said it expects “some supply chain disruption and higher inflation impacting both the cost base and customer demand”.

UK household energy bills have already risen by an average 54% to £1971 a year from last month after the regulator raised the price cap limiting tariffs. In October average bills are expected to rise again to £2900 a year.

There have been calls in some quarters for an additional “windfall tax” to be charged to energy companies raking in record profits, with the money directed towards helping relieve consumer energy bills. The counter-argument is that energy commodities are a cyclical sector and companies have not asked for government support when prices have slumped. And that huge sums, which higher profits over the next couple of years will make a big contribution towards, need to be invested for energy producers to meet net zero targets over coming years.