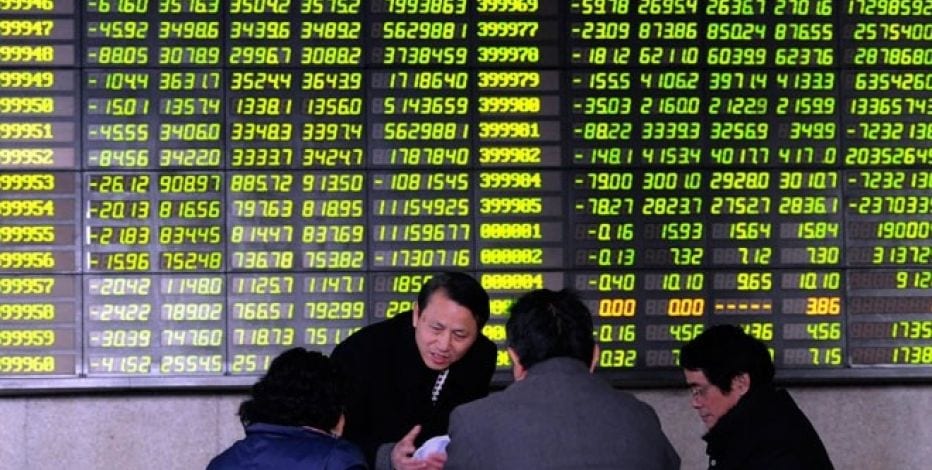 Much of the market’s attention was on the yuan, which was firmer after the central bank set a higher midpoint reference rate for the start of trade, belying fears the policy easing could put the currency under fresh downward pressure.

The benchmark Shanghai Composite Index closed up 1.7 percent, while the CSI300 index of the largest listed companies in Shanghai and Shenzhen added 1.8 percent.

Late on Monday, the People’s Bank of China (PBOC) announced a cut in the amount of cash that banks must hold as reserves – the reserve ratio requirement (RRR) – by 50 basis points. It frees up an estimated $100 billion in cash for fresh lending.

Index gains were led by financials and industrials, and property shares outperformed on signs of rising speculative interest in China’s first-tier cities.

“We think the PBOC easing is consistent with continued weaker-than-expected economic activity and downside risks to growth,” wrote Jian Chang, an analyst at Barclays. “It should help to support market sentiment in the near term.”

Economic growth fell to a 25-year low of 6.9 percent in 2015 but a slump in stocks and an unexpected devaluation of the yuan raised market fears that the economy was in worse shape than the government had let on.

Such an easing measure might have been expected to put selling pressure on China’s currency, but the yuan’s firmer performance, both onshore and offshore, was evidence of a change in sentiment since early January, when weakness in the yuan sparked a global selloff in risky assets.

“The yuan’s depreciation pressure has eased to an extent that the PBOC could afford a 50 bps RRR cut while maintaining the currency’s stability,” said a dealer at a European bank in Shanghai.

Traders said the yuan’s strength in the face of the cut was a reflection of tightening liquidity, due to a huge amount of maturing open market operations by the central bank, which were sucking funds out of the market.

“The injection from the RRR cut is helping offset drains from the money market by maturing reverse repos,” said a trader at a Chinese commercial bank in Shanghai.

That brought China’s money rates down across the board on Tuesday. A spike in the overnight rate the previous week was blamed for setting off a fresh round of falls in stocks, and some said the timing of the RRR cut was informed by concerns that shares could have fallen through a key support and returned to levels not seen since 2011.

Most of the stock market gains came late in the session, a reflection, said analyst Liu Jingde from Cinda Securities in Beijing, of investor caution in China’s volatile markets, which have tumbled about 22 percent in 2016, frequently lurching from clear black to deep red within a day.

“I expect the markets will experience big swings as well in the future, with eyes mainly on the supply-side reforms and other upcoming government policies,” he said.

Among the coming reforms are Chinese efforts to cut industrial overcapacity and pollution, which sources with ties to the country’s leadership said would lead to 5-6 million job lay-offs over the next two-to-three years.

Economists expect policymakers’ determination to cushion the impact of such reforms and slowing growth will lead to more easing measures.

Further evidence of the economic slowdown was clear in the latest surveys of manufacturing and services.

Beijing’s official purchasing managers’ index (PMI) slipped to 49.0 in February, the lowest reading since November 2011, from 49.4 the previous month and below forecasts of 49.3.

The services PMI eased to 52.7 in February, from 53.5 in January, a particularly discouraging result given how much weight has been placed on consumer spending to keep the economy afloat and unemployment down.

China’s central bank eased policy just hours after world leaders left a Group of 20 meeting in Shanghai, and just ahead of the annual meeting of China’s parliament, which is trying to engineer a major economic shift towards services and away from heavy industry.

It follows Japan’s groundbreaking shift to negative rates, while the European Central Bank is widely expected to expand its stimulus campaign at a policy meeting next week.

Indeed, the deputy head of China’s central bank on Tuesday warned of increasing spillover effects from the divergence in global monetary policies.

Chen Yulu also told a forum that there was no basis for a persistent drop in the yuan, while noting that Bank of International Settlements estimated the real effective exchange rate was around 10 percent overvalued.

That the international travel sector is, thanks to the Covid-19 pandemic, in a bit... END_OF_DOCUMENT_TOKEN_TO_BE_REPLACED

With a growing number of economists arguing there is a high chance we are... END_OF_DOCUMENT_TOKEN_TO_BE_REPLACED

While most still caveat the argument with the get-out clause it is far from... END_OF_DOCUMENT_TOKEN_TO_BE_REPLACED

Natural gas prices have rocketed with Russia accused of managing supply to drive up... END_OF_DOCUMENT_TOKEN_TO_BE_REPLACED

After their valuations boomed in 2020, the UK’s online fast-fashion giants of Asos and... END_OF_DOCUMENT_TOKEN_TO_BE_REPLACED