Chinese markets opened today after an extended break for the lunar new year to the expected sharp drop – in the event the Shanghai Composite index slumped 7.72%. It could have been much worse given the fact that the colossal country has been brought to a standstill over the past week or so due to the coronavirus outbreak that originated in the 11 million-strong but relatively internationally unknown city of Wuhan in east-central China. 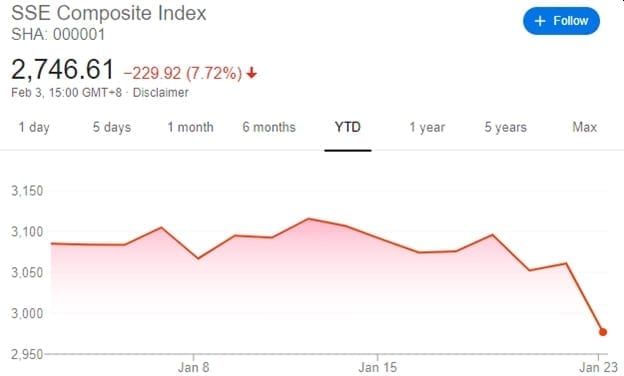 The fact that Chinese equities suffered a less severe slump than many had feared on the reopening of the country’s major stock exchanges can, in large part, be put down to the weekend announcement of a £130 billion stimulus package by authorities. The vast war chest will be injected into financial markets immediately, to provide liquidity and, hopefully, head off the prospect of the kind of stock market crash that would ripple out around Asia and the world.

The usual holiday season shutdown of China’s equity, currency and bond markets, which started January 23rd, was last week extended for 3 days as authorities battled to contain the pandemic. While the liquidity measures intimated over the weekend were not directly linked to combating the impact of the coronavirus outbreak, the obvious assumption is that they are intended to contain the financial markets fallout.

The funds, 1.2 trillion yuan, £131 billion at current exchange rates, will flow into markets today through ‘reverse repurchase agreements’, or ‘reverse repos’, carried out by The People’s Bank of China. That essentially means the central bank will buy up securities from investors. Bloomberg reports that the liquidity injection represents the most significant ‘one-day operation’ undertaken by the bank since 2004.

The net cash commitment by the bank will, however, be limited to just 150 billion yuan due to the fact that around 1.05 trillion of reverse repos made at earlier dates was due to mature today.

The coronavirus outbreak, thought to have been caused by the new virus passing over to humans from Wuhan’s seafood and animal market, has now resulted in at least 14,500 confirmed infections and over 300 deaths.

Its impact has already been felt on international stock markets while China’s own remained closed. Hong Kong’s Hang Seng index lost around 6% last week after reopening following its own lunar new year break. The impact was also felt further afield, in Europe and the USA. The UK’s FTSE 100 declined by around 4% last week and the Dow Jones industrial average 2.1% on Friday alone – its biggest one day fall since last August.

Market analysts and investors will now nervously be waiting to see if China’s approach to managing the sell-off works. AxiCorp’s Stephen Innes, based in Bangkok, comments:

“This is well beyond the Band-Aid fix. If this deluge doesn’t hold risk-off at bay, we are in for a colossal beatdown.”

Goldman Sachs expects the crisis to impact on Chinese growth by 0.4 percentage points this year and to also drag on the US economy. However, at this stage, it is still difficult to tell and very much depends on how quickly the situation is brought under control – or not. Major Chinese cities such as Shanghai and Beijing, ordinarily thronging with activity, are being described as ghost towns, as their populations avoid public spaces.

As well as the hit to consumer spending, especially severe because the crisis unfolded over the lunar new year, which is the equivalent to China’s economy of spending over the Christmas period in other parts, of the world, the crisis is also impacting international trade. Many international companies have been restricting business travel to China and airlines including British Airways have suspended flights to the mainland.

Natural gas prices have rocketed with Russia accused of managing supply to drive up... END_OF_DOCUMENT_TOKEN_TO_BE_REPLACED

After their valuations boomed in 2020, the UK’s online fast-fashion giants of Asos and... END_OF_DOCUMENT_TOKEN_TO_BE_REPLACED

The dust has almost settled on the months-long takeover battle between U.S.-based private equity... END_OF_DOCUMENT_TOKEN_TO_BE_REPLACED