Chinese equities surged to a 9-month high today as an annual government ‘legislative session’ expected to result in new economic stimulus measures got underway in Beijing. 2018 saw the June introduction of mainland-listed Chinese A-shares into the MSCI Emerging Markets Index for the first time. Though limited to just 5% of the market capitalisation of the A-shares introduced, to be raised at an undefined later date, the move was supposed to herald an influx of international capital into China’s equity markets, boosting share prices.

The conservative initial allocation of A-shares to the MSCI index, which directly controls £1.6 trillion in capital and indirectly another £9 trillion, is less than 1% of the index’s overall weighting (compared to around 15% from South Korea). This was always going to limit the immediate impact but it has still been disappointing. The U.S-China trade war has hit China’s economy, accelerating a slowdown that meant the entirety of 2018 remained in the grip of a bear market. 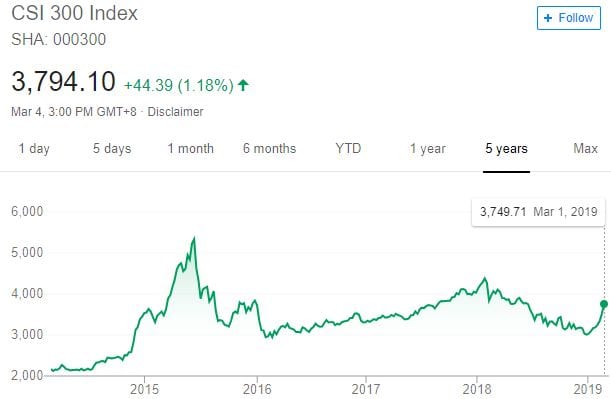 However, 2019 has heralded a turnaround in fortunes with the CSI 300 benchmark gaining over 26% now since the turn of the year. A return to optimism can be put down to general positive momentum across international equities markets combined with hopes that ongoing talks will result in a new trade treaty with the USA and the promise of new government stimulus measures. China’s economic policymakers have intimated that new tax cuts and renewed infrastructure spending will be introduced to spur growth. It is believed that the bout of legislation sign-offs due this week will crystalise those promises.

“We believe that foreign investors, especially active managers, have been leading the rally by adding A-shares due to attractive valuations. Local institutional investors are now participating more and driving medium to small cap stocks. Retail investors are finally feeling more optimistic and this could sustain the momentum further.”

MSCI last week announced the decision to quadruple its Emerging Markets Index’s weighting to Chinese A-Shares, taking it up to 3.3%.

The rise in optimism defies expectations for an imminent downgrading of China’s economic growth forecast by the National People’s Congress. GDP growth has been forecast for 6.5% this year but that is anticipated to be reduced this week.

UK investors have a number of options for direct exposure to China’s equity markets other than broader emerging markets funds and index trackers. Some of the biggest China funds available via UK investing online platforms include:

The Nasdaq dropped 1.9%, while the yield on 10-year Treasury notes dropped to 1.557%... END_OF_DOCUMENT_TOKEN_TO_BE_REPLACED

The dollar’s received a further boost as the Nasdaq dropped more than 2%, the... END_OF_DOCUMENT_TOKEN_TO_BE_REPLACED