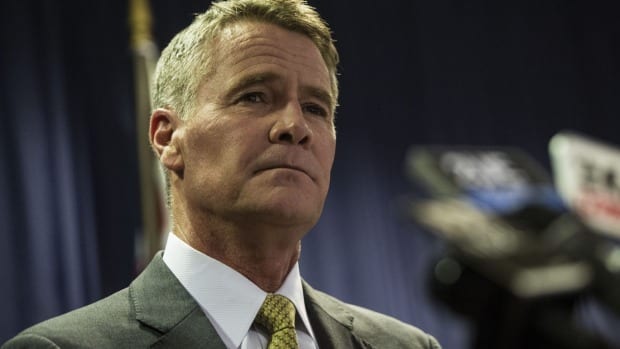 A Chinese-based property firm that has donated hundreds of thousands of dollars to Australian political parties has added former deputy premier Andrew Stoner to its payroll eight months after he left Parliament.

Mr Stoner has has told Mr Evans the role involves “providing advice on suitable investments in the agribusiness sector and export of agribusiness products” but not lobbying government.

In his advice, Mr Evans also says Mr Stoner has advised him that he “did not have any official dealings with [Yuhu] during your last two years of office”.

However, Yuhu’s website carries a report and photographs of Mr Stoner attending a “Chinese Business Leader Roundtable Meeting” at NSW Parliament in April 2014 when he was deputy premier and trade minister.

On Tuesday, Mr Stoner said he recalled the meeting but was not aware a Yuhu representative was present. He would now inform Mr Evans of the fact.

Mr Stoner suddenly resigned as deputy premier and trade minister in October 2014 before quitting Parliament at the March 2015 election.

In May, Fairfax Media revealed Mr Stoner breached the ministerial code of conduct by failing to seek advice from the ethics adviser before accepting an advisory role with investment bank Moelis Australia.

He only sought the advice after he accepted the part-time position and following media inquiries.

Australian Electoral Commission records show YuHu Group (Australia) declared donations of $670,000 to the Liberal and Labor parties during 2013-14, mostly before the 2013 federal election.

In March, it was reported that Yuhu paid a sum believed to be $5000 to settle a legal dispute between Senator Dastyari and an advertising company, Diversified Communications.

The dispute related to campaign advertising work promised to Diversified Communications by Senator Dastyari when he was NSW ALP general secretary.

Safety Check, Anonymous vs IS and when crowdfunding goes wrong

That the international travel sector is, thanks to the Covid-19 pandemic, in a bit... END_OF_DOCUMENT_TOKEN_TO_BE_REPLACED

With a growing number of economists arguing there is a high chance we are... END_OF_DOCUMENT_TOKEN_TO_BE_REPLACED

While most still caveat the argument with the get-out clause it is far from... END_OF_DOCUMENT_TOKEN_TO_BE_REPLACED

Natural gas prices have rocketed with Russia accused of managing supply to drive up... END_OF_DOCUMENT_TOKEN_TO_BE_REPLACED

After their valuations boomed in 2020, the UK’s online fast-fashion giants of Asos and... END_OF_DOCUMENT_TOKEN_TO_BE_REPLACED