Sumo Group, one of the UK’s largest games studios, is to be sold to China’s Tencent for a price reported as close to £1 billion. The 2003-founded company yesterday accepted a 513p-a-share offer from the Chinese technology company whose core business is mobile apps and games, leading to a near 40% leap in the Sumo share price yesterday. 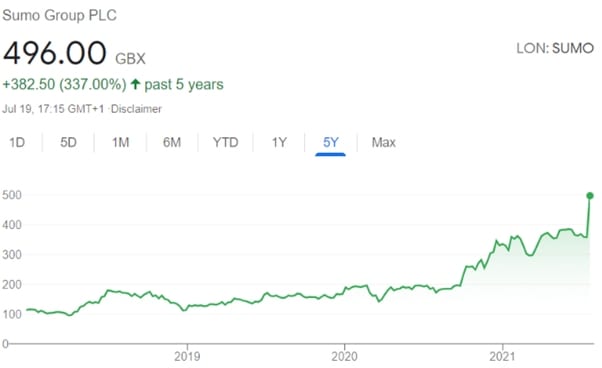 Sumo was founded 18 years ago by Carl Cavers, Paul Porter, James North=Hearn and Darren Mills and has worked on popular video games titles including the Sonic the Hedgehog franchise and Hitman and Sackboy: A Big Adventure. The games studio is the second major British name to be recently sold to a larger foreign company over a period of consolidation and dealmaking across the industry. Racing games specialists Codemasters was snapped up four months ago by U.S. giants Electronic Arts, the company behind the hugely popular Fifa football game.

Sumo has been a public company since 2017, when it floated at 100p-a-share. Co-founders Cavers, currently the chief executive, and chief operating officer Porter, will make around £27 million and £24 million respectively from the sale to Tencent.

London has recently been a popular hunting ground for international giants as a result of valuations of London-listed companies trailing comparable peers on other stock exchanges. But Sumo Group still seem to have struck a reasonable deal with Tencent’s £919 million offer a 43% premium on the company’s closing price last week. The Chinese company, whose biggest product is the WeChat messaging app that is hugely popular in China and other parts of Asia, already owns 9% of Sumo.

Sumo has itself grown via the acquisition of rivals and owns a total of fourteen games development studios across five countries. Last year the company generated revenues of £68.9 million for an underlying profit of £16.5 million. Its core business is developing games titles owned by major publishers, providing services such as design and artwork and counts Xbox, Amazon Games Studios, Google, Apple and the BBC among its clients. It also launched its first fully in-house game Snake Pass in 2017 and plans to continue to develop its own IP assets as well as working on the titles of other companies.

Successful video games can be hugely profitable but also involve a large upfront investment with no guarantees they will prove a hit. That high risk profile was reportedly a major factor in the Sumo board’s decision to accept the offer from Tencent, who will keep the company’s headquarters in Sheffield. Retain the current senior management team and invest in growth.

Mr Cavers commented on the decision:

“The opportunity to work with Tencent is one we just couldn’t miss,” Cavers, 53, said, adding that the buyer had a “track record for backing management teams and their existing strategies”.