The share price of London-listed cinemas operator Cineworld has slumped by over 38% today after the Ontario Supreme Court of Justice ruled it must pay damages of C$1 billion (£590 million). The damages are in connection with Cineworld pulling out of an acquisition of the Canadian cinema group Cineplex.

Cineworld, which operates and owns cinema brands across several central and east European countries as well as the UK, Ireland, Israel and the USA, said the verdict was a shock and that it would appeal. 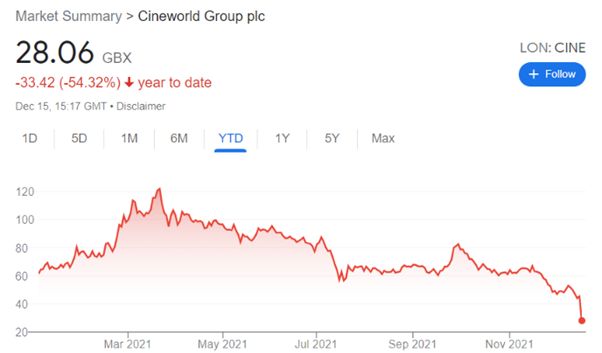 Cineworld pulled out of a C$2.8 billion (£1.6 billion) approved deal to acquire Cineplex in 2020 after the Covid-19 pandemic struck. Cineplex, whose argument is the unfortunate timing of the pandemic’s arrival did not dissolve Cineworld’s legal obligation to follow through on the deal agreed, immediately launched litigation. The Toronto-based company sought damages of C$2.18 billion (£1.28 billion).

That was followed by a counter-claim from Cineworld who said it had pulled out because Cineplex had “breached a number of its covenants”.

Yesterday, the Canadian court sided with Cineplex and awarded C$1.23 billion in damages for “lost synergies” and C$5.5 million in compensation for transaction costs sunk by the Toronto company. Cineworld’s counterclaim was also thrown out.

Had the deal gone through, Cineworld, the second-largest cinema operator in the world after Odeon-owner AMC, would have acquired another 165 cinemas to add to its Cineworld and Picturehouse brands. The company was established in 1995 and listed on the London Stock Exchange in 2007. The 2018 deal to acquire Regal, the second largest cinema chain in the USA, for $5.8 billion, was transformative for the company and hugely accelerated its growth.

AMC chief executive Adam Aron did not try to hide his satisfaction at yesterday’s ruling, tweeting:

“Will be appealed, but anything distracting or destabilizing our biggest competitor brings opportunity to AMC.”

“We are pleased that the court found Cineplex acted properly throughout this difficult period in our history.”

“With roots that go back over 100 years, we are proud of the relationships we have maintained through this process and remain steadfastly committed to our guests, shareholders and team across Canada and the United States.”

The damages Cineworld have been ordered to pay are far ahead of market expectations and amount to more than Cineworld’s valuation (now less than £390 million) or its available liquidity. It may well now be obliged to raise new capital on unfavourable terms. The company’s valuation is down almost 55% so far this year.