The Coinbase share price soared by up to 71% on the cryptocurrency exchanges market debut in New York yesterday, valuing the company at up to $100 billion. The spectacular debut, and huge interest in the IPO ahead of the listing, is being heralded in some quarters as a watershed moment for the cryptocurrencies market. In others it’s being taken as further sign markets are reaching a dangerous boiling point.

Bitcoin, the cryptocurrency whose recent price surge to above $60,000 has made Coinbase’s listing success a possibility, also hit a new record high of $64, 863 ahead of Wall Street opening. 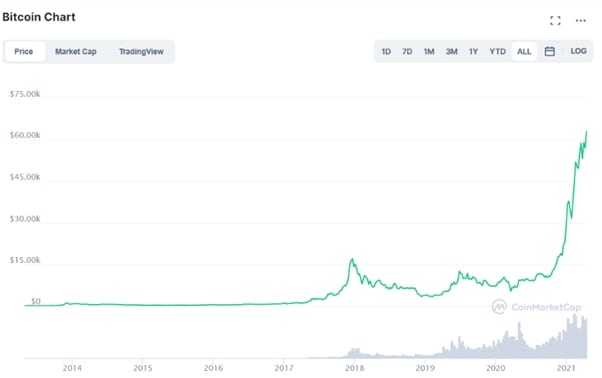 Having quickly risen to $429.54 in early trading, the Coinbase share price eventually closed at $328.28. That was still 31.3% up on their reference price of $250 (Coinbase opted for a direct listing rather than traditional IPO) and equated to a fully diluted valuation of around $86 billion, including stock-based awards like options.

Coinbase was first established in 2012 by co-founders Brian Armstrong (38), a former developer for IBM and software engineer at Airbnb, and Fred Ehrsam (33) a former Goldman Sachs trader. The pair, both early cryptocurrency bulls, met on Reddit and established the exchange with the ambition of making cryptocurrency trading more accessible and secure. Ehrsam left Coinbase in 2017 but remains on the company’s board and holds an estimated 6% of its stock. Armstrong is the Coinbase CEO and holds 21.7% of its stock.

After struggling for survival between 2014 and 2017 with many convinced the nascent cryptocurrency market had failed to make real progress and was ultimately doomed, Coinbase now has over 56 million account holders across over 100 countries and employs 1700 staff. The digital assets hold on its platform are worth over $223 billion, representing 11% market share.

Even if unvested options and restricted stocks are discounted from its valuation, Coinbase is now still worth around $65 billion. That makes it, at least for now, a more valuable business than Bank of New York Mellon, the oldest bank in the USA and one of the biggest.

Mr Armstrong commented on the decision taken by Coinbase for a direct listing rather than an IPO:

“I wanted there to be a true market on day one that set the price, not something that was set behind closed doors and a small number of participants got to buy in early. I felt it was more true to the ethos of crypto to give us a price the market decided.”

A cynic might also say a direct listing meant cryptocurrency fanboys and girls would set Coinbase’s valuation rather than pitching professional investors via an IPO. At its current valuation, Armstrong’s stake in Coinbase is worth about $15 billion.

Yesterday’s markets euphoria also saw the “stonk” stocks popular with the Reddit crowd behind the GameStop trading craze see significant gains. The video games retailer gained 18.5% for no apparent reason and cinemas operator AMC, another favourite, was also up almost 6%.