The Countryside Partnerships share price has leapt 25% this morning on news the American private equity group Inclusive Capital Partners has launched a direct-to-shareholders bid for the company that values it at £1.47 billion. Based in San Francisco, Inclusive Capital already owns a 9.2% stake in Countryside and has attacked the developer’s recent performance.

The investor has reportedly had two confidential bids rejected since March and is now taking matters into its own hands by circumventing the Countryside board with a direct offer worth 295p-a-share. Markets appear to believe rival bids may now emerge with this morning’s gains taking the Countryside share price to 298.42p-a-share. However, despite the 25% leap in its market cap this morning, the housebuilder is still worth almost 43% less than it was a year ago. 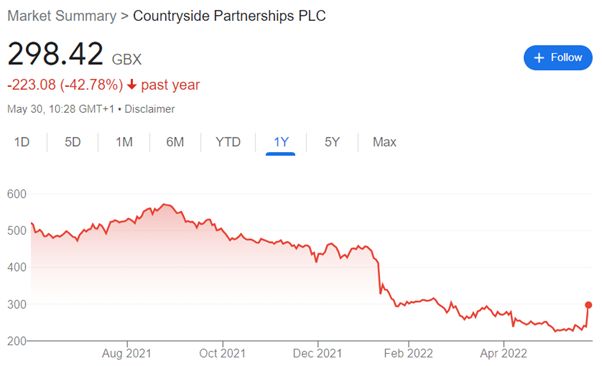 The company’s recent decline in valuation has convinced the American group it is significantly underperforming and says its offer is a 31.4% premium to Friday’s closing share price. Explaining the decision to make shareholders a direct offer over the heads of the company’s board, the investor commented in an official stock exchange statement:

“The In-Cap team believes that Countryside shareholders deserve the opportunity to decide on the merits of any offer.”

In-Cap founder Jeffrey Ubben, who set up the private equity group in 2020 after leaving his $16 billion hedge fund ValueAct Capital, said of the hostile bid:

“We believe Countryside is meeting a critical societal need and is best positioned to serve this role and to succeed as a private company under ownership of investors with a long-term investment approach.”

“In contrast, the board of directors of Countryside has presided over the flawed acquisition of Westleigh in 2018, a dilutive equity financing in 2020, and the appointment of a chief executive officer with little to no prior public company executive experience that oversaw overly ambitious expansion into new geographies and investment into excess manufacturing capacity that is now generating losses.”

“For the reasons set out above, we believe our proposed offer represents a highly attractive premium for Countryside shareholders.”

The initial reaction of analysts is that In-Cap’s bid is probably too low to convince investors with Peel Hunt commenting that at an implied earnings multiple of around x8 “would appear far too cheap in our view” and it “would be surprised to see the offer accepted at the current level”.

Founded in 1958, Countryside initially focused on small residential developments in Essex and east London and now develops usually larger projects in partnership with housing associations and institutional landlords. In-Cap positions itself as a “social investment company” and sees Countryside’s focus on affordable housing as both in keeping with its investment strategy. It also sees strong prospects for the company, which is sees as having underperformed its potential over the past two years, as a result of the increasing pressure on the UK government to drive the construction of more affordable housing.

Browning West, another private equity activist investor from California owns 15% of Countryside and has previously called for the developer to be split into two, with separate businesses focused on private and public sector development. Last week Countryside announced a £181.5 million pre-tax loss for the half-year to March compared to a £85.4 million profit a year earlier. Completions were down almost 25%.