Lord Rothmere, the Daily Mail and General Trust’s biggest single investor, has moved a step closer to realising his ambition to take the company private after reaching an agreement over the sale of the group’s insurance business RMS. The American credit ratings agency Moody’s has offered £1.4 billion for RMS, which helps insurers more accurately estimate the risk of extreme weather events.

It’s a better price than most analysts had expected the business to fetch and represents a multiple of 38 times underlying earnings. Cash raised from the disposal of the business will be returned to shareholders, reducing the size of DMGT. Lord Rothermere, whose family owns 36% of DMGT and controls all of its voting stock, last month made public his desire to take the company back into private ownership. It has been listed on the London Stock Exchange since 1932. 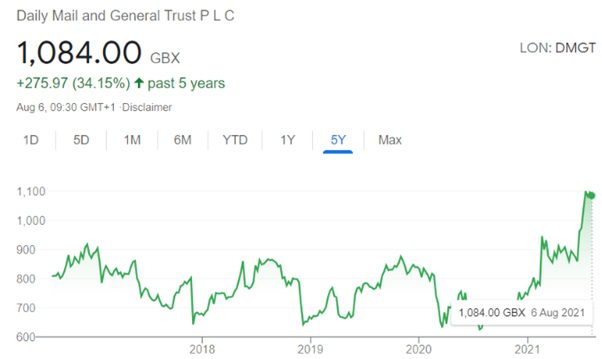 The DMGT board has said that it will support Rothermere’s move to take the company private but must first also reach an agreement with the group’s pension trustees. A 20% stake in the digital used car retailer Cazoo, scheduled to list in the USA this month through a Spac reverse-takeover deal, will also need to be disposed of. The deal values Cazoo at $7 billion, which would mean DMGT’s stake is also worth £1.4 billion.

Rather than selling the newly listed Cazoo stock off and returning the cash to shareholders, DMGT shareholders will be allocated shares after the listing and be able to choose to keep or sell them to their own schedule.

Risk Management Solutions (RMS) was acquired by the Daily Mail owner in the late 1990s with investment increased over recent years, helping to build up the business’s valuation. It operates over 400 climate and natural disaster assessment risk models covering 120 countries. Insurers pay for access to RMS’s data and risk modelling to more accurately price their products and manage exposure to the repercussions of increasingly influential extreme weather conditions. Of the £1.4 billion the sale will generate, £210 million will be paid to RMS’s minority shareholders and staff and to settle tax bills and other expenses. Another £60 million will go to the company’s pension funds with more needed to clear the scheme’s actuarial deficit.

Shareholders will then also receive a special dividend of around 610p-a-share from the remaining sale price.

At that point, Lord Rothermere intends to bid £810 million, 251p-a-share, for the remainder of DMGT, which will include its publishing business and smaller events and property information and data companies.

Over the past few years, DMGT has also sold off its online education business Hobson, its stake in the online property portal Zoopla, and the energy data provider Genscape.