The share price of London-listed cybersecurity firm Darktrace yesterday fell almost 8%, extending losses over the past five trading sessions to 14%. The slump in the company’s valuation came after it informed the stock market that staff whose holdings in the company have been locked up since its flotation last April are expected to sell shares over coming weeks when the period they have been blocked from doing so ends.

Hundreds of the company’s employees own around 85.5 million shares they have been prevented from selling from the past year due to IPO rules. However, the lockup period expires at the end of this month and significant blocks of stock are expected to placed on the market by staff eager to cash in on part of their holdings. The company’s share price is around 12% higher than the level it started trading at late last April. 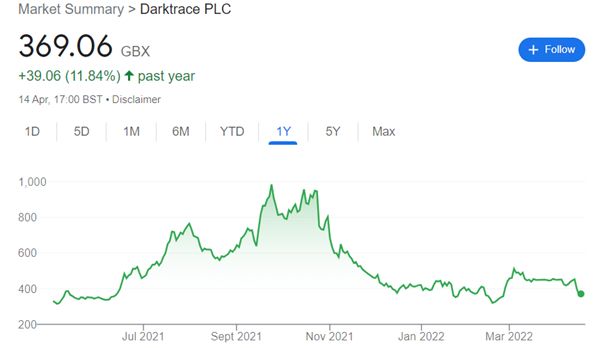 Yesterday Darktrace said it had offered staff with shares who wanted to sell some of them the opportunity to take part in a placing. Based on the response so far it is expected that around 20 million, worth around £80 million at yesterday’s closing share price of £3.69 each, to be sold.

The £2.8 billion-valued company, which is based in Cambridge, employs around 2000 staff, many of whom were awarded shares ahead of the company’s 2021 IPO.

News of the sell-off distracted from a positive trading update delivered earlier in the day that saw Darktrace raise its forecasts for the third time since the start of 2022. The share price gained almost 6% on the announcement of a “strong trading performance” over the quarter to the end of March during which 359 new customers were added to take the total to 6890.

As a result, full-year guidance for annualised recurring revenue growth has been lifted to between 40% and 41.5% from a previous estimate of between 38.5% and 40%. An adjusted earnings margin of 15%-17% is also now expected from a previous forecast for 10% to 12%. The company also upgraded its forward guidance in January and again in March.

Darktrace’s cybersecurity products use machine-learning to adapt to new threats and the company was founded in 2013 as a collaboration between former government intelligence experts and Cambridge mathematicians.

It was originally funded by the technology entrepreneur Mike Lynch who is fighting extradition to the USA on charges of fraud related to the sale of Autonomy, the tech company he founded and sold to HP for $11.7 billion (£7.4 billion) in 2011. Within a year, HP had written off $8.8 billion of Autonomy’s value which it claimed resulted from “serious accounting improprieties” and “outright misrepresentations” by the previous management.